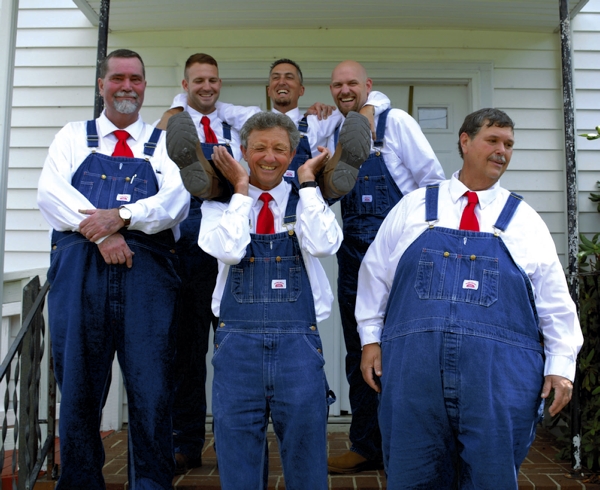 The Gospel plowboys believe in Proverbs 17:22, which says “a merry heart doeth good like a medicine.”

Four years ago this summer, the Gospel Plowboys formed. On June 10, the group released its first CD, “Welcome Home,” with its new label, Mountain Fever Records.

To band members’ surprise and utter shock, the album debuted at number 14 on the Billboard bluegrass chart. The group continues to be gratified by the response it receives from audiences, mainly playing at churches but also at bluegrass festivals.

The Gospel Plowboys will appear at 6 p.m. Sunday, Aug. 14, at First Baptist Church in Salisbury, and at 7 p.m. Saturday, Aug. 20, at Third Creek Presbyterian Church, Cleveland, with a reception to follow. In September, they’ll return to the Outer Banks Bluegrass Festival on Sept. 22-24.

“They asked us to play again as soon as we got home,” Michael says.

“I think it’s just a different sound,” Kris says of the band’s blend of bluegrass and gospel music.

No matter what the music, they all agree that the emphasis is on the Good News. Their mission — and the reason for their name — is to “plow the ground and plant the seed that Christ died for you.”

“I’ve been playing for a lot of years,” says David Murph, who handles the band’s bookings. “I’ve been in a couple of bands, but the Lord laid it on my heart to get started in music ministry. I just started praying.”

He founded the group along with Michael, Andrew, and John. David Brown soon came on board, and took over Andrew’s duties on upright bass when his son went into military service. He’s stationed with the Army at Fort Campbell, Ken. Kris joined a couple of years later, and the group’s lineup was set.

They’re pleased that “Welcome Home” has been so well received. It’s even showed up on music charts in Australia and Canada.

The Gospel Plowboys participate in either Sunday morning or evening services.

Bluegrass music, he says, is appealing because “it’s simple. It’s nothing to hide behind.”

The group is known for its tight harmonies, John says, “and there’s a message in the word.”

The group’s home church is Safe Harbor Baptist Church, where David Murph and Michael are all members.

“They support us prayerfully because we put God first,” David Murph says.

The others also attend Baptist churches, with John as the group’s lone Methodist.

The Gospel Plowboys appeal to a wide audience. Among their gospel selections are hymns from the Red Back Hymnal, a hymnbook used in Baptist and Church of God congregations.

“A lot of young people have never heard our music,” Michael says, “and the older audience members love hearing the old songs.”

The common purpose of all the music, however, says David Murph, is to uplift the Lord. “The number-one thing with us is salvation. We’re all pulling in the same direction.”

Indeed, there are probably few music groups who have a “salvation” tab on their Web sites.

“We sort of let the Lord have his way,” David Murph says. “We’ve got the answer to the world’s problems, and that’s Jesus Christ. We want to share it.”

“Welcome Home” includes a variety of hymns and bluegrass selections, all cover music. The next step, David Murph says, is to write original music.

“I ain’t gonna lie,” Michael says. “The first time we sat down and practiced, the music was good. But with the voices, I thought, this ain’t gonna work. Andrew was playing bass, and we didn’t know he could sing lead. We have to move some parts around, and then something clicked.”

“There’s a reason for that,” he quips.

David Murph, 57, and John, 52, do not work, so the other three members’ work schedules dictate how much the band plays and how far it travels. David Brown, 58, is with DukeEnergy, Michael, 37, works for the City of Charlotte and Kris, 38, for James River Equipment. The group has appeared throughout North and South Carolina, along with West Virginia, Tennessee and Kentucky.

“We love the Lord and we want people to know that Jesus loves them,” Michael says.

The group has posted videos on YouTube, and has developed a following online. They were in Pigeon Forge when someone hollered at Michael across the parking lot.

The video of “What a Day That Will Be” has garnered more than 1 million views.

Band members’ families travel with them. Their wives help out with photography and merchandising, and the guys say they wouldn’t want it any other way.

“It wouldn’t be worth the time away,” Kris says, “but people come up and shake your hand and let you know our music has made a difference with them in some small way. That’s what makes it worth it.”

For more information about the Gospel Plowboys, visit www.gospelplowboys.com or call David Murph at 704-798-0696. You can order the “Welcome Home” CD from the Web site at $15 plus $2 shipping.