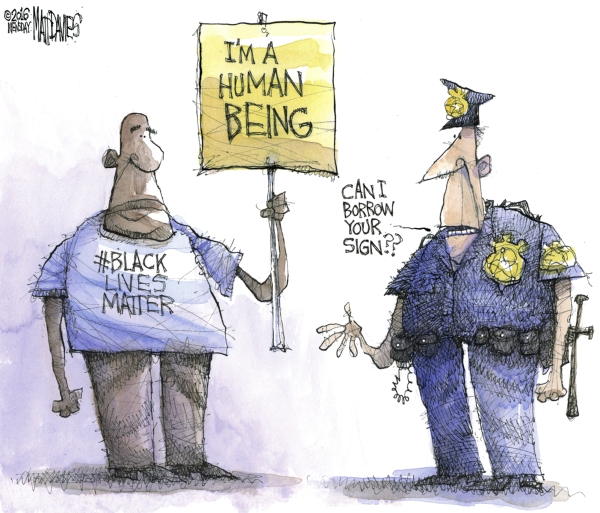 Thank you for using your platform to speak unfiltered truth. Remember, darkness can’t dwell where light is, so keep letting the light in you shine. Darkness will flee.

OK. Then let’s start saying “Black Lives Matter Too.” That way you can acknowledge the need to stop the killing of all races — black on black, white on white, Muslim on Christian, you name it.

Those of us who care need to watch out for the rest of us and have the courage to cooperate with the police to turn in the bad people and the bad cops. But the killing has to stop, and it must begin with us. All of us.

Black lives do matter, but if you had a coin that was only stamped on one side, you would know that something was amiss with that coin! There is my analogy of the movement.

Sadly, more officers killed today (Sunday). I find no joy or any “I told you so” in all the shootings between the police and the black community lately. …

When you rush a person to move on and force healing that people are not ready for, you take options away from people and minimize their pain. People then revert to instinctual behaviors to show that pain, absent of rational and logical thinking. Instead of pointless, feel-good, rah-rah sessions and photo ops, seek to truly understand the depth of how traumatic this is for people and put proper and effective interventions into place. If not, we will continue with more and more situations that result in more black, blue and “All Lives” hashtags

What a wonderful experience — marching in solidarity, peace and equality. And thanks to the excellent police protection throughout the entire route.

On the front line with my husband and his best friend. Peaceful and powerful!

Ms. (Rhonna) Oglesby is to be commended for creating this event upholding the need for us to examine our consciences.

Very organized and peaceful. I’m very proud of those who participated or showed respect.

This peaceful march was made up primarily of young adults — people committed to taking on their right to and responsibility for having their political voice heard.

New leadership is rising. They seek knowledge but can teach us all a great deal about how to change a paradigm. Watch them. They will be a force to be reckoned with and will make us proud.

Today was a day that spoke volumes to me and my children. I am a black mother, wife and Salisbury citizen. I attended the walk with my daughter (10), son (15), god daughter (15) and another male youth (15). My 15-year-old son was very afraid and worried about attending the march. … This broke my heart. My son doesn’t feel safe even with police present! This spoke volumes to me and something must change.

As we marched to our destination and returned to our car, … I thanked each police person we passed for collaborating with the march efforts. Each police officer responded back and stated politely, “Thank you, have a good day.” …

Today said to me, for change to occur, I must, we must, be part of the change!

I keep reading all these letters to the editor that are frustrated with Hillary not being indicted. Who are you blaming for this? Who are you angry at? Remember that conservatives control our federal government right now. Obama has little power (presidents, in general, have little power when Congress is against them).

I ask these questions not because the writers are wrong but because they seem to be angry with the wrong people. … It’s Congress that needs cleaning up. The votes you cast for your U.S. and N.C. representatives, along with our local Rowan and Salisbury representatives, matter much more than who is president.

… Leonard Pitts: Police not the problem, we are

Is there any logical reason that “the police” as in “…the police are the reason…” should be less offended by inclusive generalization than Mr. Pitts might be by the phrase “…African-Americans are the reason…?” Let me guess; it’s different. The next time someone jacks your car, call a protester — or a columnist.

How do we know whether or not the videos are edited prior to exposure to those who are subjects of the videos? I assume they may be used in a court of law.

Let’s hope that body cameras will cause a perpetrator to think twice before harming an officer of the law. Videos taken by private citizens should be allowed, especially those that are live-streamed.

Wow. I turned 60 last month and am dealing with the same issues you talk about. I stare into the mirror wondering: (1) How can I be this old, and still want to do the things I want to do? (2) My dad could not possibly have had the same thoughts I do. And (3) how long will my body let me keep up with the crowd I run with? As the others have commented, thank you for putting my story so eloquently into words.

Mr. LaRue, you wrote my story. Glad to know it’s not just me.

Not too much news in the paper nowadays to make me smile, but this letter sure did. As I turn 57 this year, I too never knew I would live this long either. LOL. One of my favorite sayings from the past is if you remember the ‘70s you were not there. Rock on, sir and live long and prosper.

Why ruin a Clinton hater’s letter by posting facts?

It was amazing to hear your story. I am so glad you stopped in my office for directions. You are amazing! Best of luck!

What a pleasure to meet you, David. What an awesome trip you are doing; someday (I) would love to do that. Glad to see you are safe. Spin on!

I am reading your blog from the Birmingham, Ala., area but I have deep roots in Salisbury. I read about your trip down the East Coast. Think you should try to follow the Lincoln Highway sometime. Safe travels.

This is just horrible news to hear. I worked with Joyce at Rowan Regional Medical Center for years and she was indeed a very kind, caring, hard-working woman. She would help anyone if they just asked her, but to know it was her grandson makes it even more horrible. May her family let God help them find some peace in knowing that Joyce is now with her husband, Wayne, once again. My condolences to all of them.

… Salisbury songbird finds in Cuba music is a universal language

Wonderful article about a fabulous singer. Thanks to Gerry Hurley and Matthew Brown and any others who helped make this trip possible. Also, I can’t help thinking of Cindy Pribble, who first discovered Teresa’s talent.

Amazing how they talk about conscientious spending of taxpayer money but have no issue (wasting) $116,000. Idiots all?

School consolidation, relocation and redistricting are emotional issues for many people who are accustomed to three or four generations of having attended a community school. I do not envy the school board. Any decision they make is going to be deeply criticized by members of those communities.

A perfect example of mismanagement of funds by the school board once again.

Curly Seckler (Sechler) is a very important first-generation bluegrass artist who helped define the genre. He was from China Grove and got his professional start on radio in Salisbury. He is known around the world for his contributions to bluegrass music, and has freely told folks about his origins in Rowan County, China Grove and Salisbury his whole life.

I am a radio DJ in Connecticut. When I interviewed Mr. Seckler on the air 10 years ago, we spent much time talking about his home area. Salisbury has no better ambassador, and I for one would be thrilled to drive down Interstate 85 and see Mr. Seckler’s name on a section of highway.

… The Flood of 1916: Hundredth anniversary

My mother, Willie Whitmire Sanford, was 8 years old during the great flood of 1916. Her family lived in the Quebec Community not far from Lake Toxaway in Transylvania County. She recalled vividly when the earthen Toxaway Dam broke and sent millions of gallons of water down the mountain into S.C. She said it sounded like a hundred freight trains all going by at once.

My grandfather, Tildon Whitmire, was a section foreman for Southern Railway in the Brevard-Rosman- Toxaway area. He had to go and check to see if a trestle was still intact as it was vital to the rail traffic in the mountains.

My grandmother, Myrtle Reece Whitmire, my mother and her little brother Cecil went with Granddaddy, and they stood on the bank as he tied a rope around his waist and the other end to a tree and inched his way across the trestle with just his head above water. He was able to report that the trestle was intact, but he had no way of knowing what it looked like underneath.

According to the U. S. Geological Survey, that was the most rain that ever fell in the U.S. in a 24-hour period.