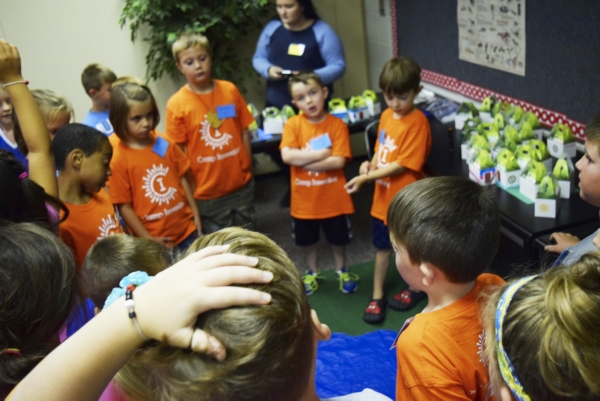 Campers scratch their heads over a problem at Camp Invention, hosted at Horizons Unlimited. The camp encourages students to think creatively through problems — like how to ferry a solar-powered robot across a pool of water. Rebecca Rider/Salisbury Post

SALISBURY — Noise spills from the classrooms at Horizons Unlimited as students scratch their heads, searching for a solution, or race out into the hall to rifle through piles of cardboard, foam or plastic.

They’ve been given a problem to solve: a hose was left running, leaving a puddle of water — how would they get a solar-powered robot over the puddle to turn off the hose?

The students, all campers at Camp Invention, held at Horizons this week, are full of ideas. They pull apart cardboard tubes and unravel yarn and build bridges, pulleys and ziplines. And it’s one of the wonderful things about Camp Invention, Neil Pifer, planetarium director at Horizons said.

“It’s not just a random story,” he said, “It’s them telling their own story.”

Throughout the week, the 52 campers are presented with a number of problems and invited to solve them however they see fit. Can they make a pig fly, build a water filtration system, catch an octopus, build an exoskeleton or make something new out of an old VCR?

“They’re kind of starting with nothing and it just grows from the ground up,” Pifer said.

The camp provides the framework, and the kids provide the energy and enthusiasm. Camp Invention is a national program that was started in 1990 by the National Inventors Hall of Fame to promote interest in science, technology, engineering and math. Pifer said Horizons has been wanting to host the camp for some time, but this is the first year they’ve succeeded.

The campers at Horizons represent 23 local elementary schools and a range of ages – from rising first-graders to rising sixth-graders. And it’s more than just a science camp. Pifer said lessons include history briefs on famous inventors and inventions, and he said that many students have expressed an interest in writing stories about the problems they crack. Most of them are learning without even knowing it.

“They just know they’re at camp,” he said, “They don’t realize this is a new way to do education.”

If they did, he said, maybe it would take the shine out of the week. But maybe not. Campers were smiling and chattered excitedly about their projects – whether they were designing a treehouse or learning how to make putty.

Jalyn Johnson proudly showed off her greatest prize: a cricket-shaped robot that runs on solar power.

All of the campers got a chance to make one, with the materials provided by Camp Invention. Johnson said she loves the camp because it allows her to invent and explore in different ways.

And it’s right up her alley, too — she’s a tinkerer at heart.

“I like to tamper around with things and I like to work with my hands,” she said.

In the basement, a group of younger students are working to make putty and different types of slime. Some of them wear necklaces made out of circuit boards — taken from old electronics they brought in and will use to construct something brand new. Mallory Rhyne said that’s her favorite part.

“You can always fix something and you didn’t know it,” she said.

Pifer said the camp had space for up to 120 kids, and he said he hopes that next year, the camp is full. He’d also like to see if local businesses could sponsor students who may not be able to afford the nearly $200 camp fee. But mostly, he just wants it to grow.