Tony-nominated musical comes to The Meroney: PPT presents ‘Hands on a Hard Body’ 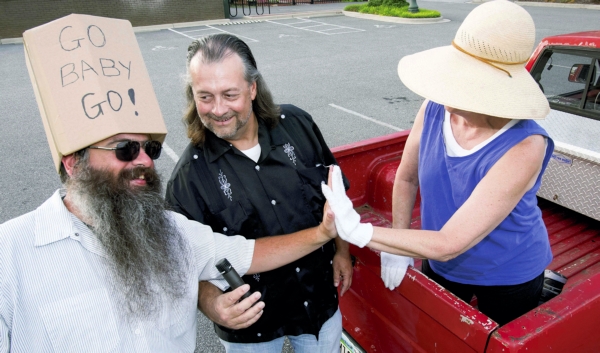 For 10 Texans who are down on their luck, the chance at a new life is only fifty-some hours and a hardbody truck away.

PPT’s final show of the season is based on the real-life “Hands on a Hard Body Contest,” chronicled in the 1997 documentary Hands on a Hardbody. The contest, held annually in Longview, Texas in the 90s, lasted for seventy seven continuous hours and the film garnered the Audience Award for Best Documentary at the Los Angeles Film Festival.

This all-American musical tells the story of the small-town Texas endurance contest, where the contestant who keeps their hands on a truck the longest without leaning on the truck or squatting wins the truck…with only 15-minute breaks every six hours. A story of endurance, hardship and the American dream, the show explores a diverse cross-section of a small-town Texas community and the trials they’ll endure for a chance to win a Nissan hardbody truck.

The contestants don’t have much in common except they are all in need of a life change and each believes the truck can jump start that transformation. From Jesus-loving Norma Valverde (Alexis Greer) and injured and out-of-work J.D. Drew (Barry Dyson) to boastful former winner Benny Perkins (Dennis Welch) and hopeful dreamer Kelli Mangrum (Heather Love), each character has their own vision for the realization of their American Dream — and they’ll keep their hands on it as long as they can.

The Broadway version of the production earned three Tony nominations and nine Drama Desk Award nNominations including Outstanding Musical. The Tony-nominated score by Trey Anastasio of the indie jam-band Phish, features instruments not usually found in an orchestra pit, including various acoustic guitars, a fiddle and even a mandolin. Perhaps the New York Times put it best in saying, “This is a Broadway musical that has its ear attuned to the specific kinds of music each of its characters might listen to, so the score ranges from gospel to blues to country to slightly rougher-edged rock. None of it sounds like traditional show music: think of Mumford and Sons, not Rodgers and Hammerstein.”

In the PPT version, which opens next Thursday at the Meroney Theater, the most noteworthy cast member is the full sized Nissan Hardbody truck that moves around the stage with the actors as they dance and sing across the stage while maintaining contact with the truck (except for short daydream type-sequences that take place on occasion).

Armed with nothing but hope, humor and ambition, these 10 contestants will do anything it takes to win, but in the heart-felt, hilarious, hard-fought contest that is “Hands on a Hard Body” only one winner can drive away with the American Dream.