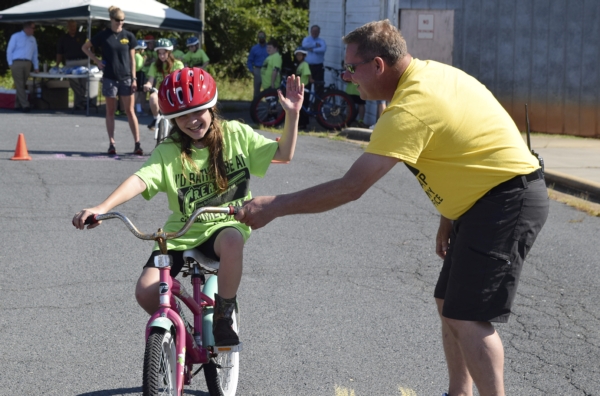 GRANITE QUARRY — When Alana Carlyle pulls up to the stop sign on a bike, deputy Tommy Cato holds the handle bars, keeping its rider stabilized while she signals a right turn — left arm out and bent at a 90 degree angle. Danny Lindley, monitoring the stop, asks her to show a left turn, a stop and a right turn again.

When he’s satisfied, he gives her a thumbs-up, and Cato pushes her forward, running beside the bike and helping her balance as she weaves through the obstacle course in Erwin Middle School’s parking lot. Soon, he lets go, and Carlyle is coasting on her own. As she pulls up to a clump of other campers she hops off the bike and unclips her helmet.

“Even if we didn’t get nothing else today, we got that right there,” Lindley said.

Carlyle is one of 28 children participating in the Rowan County Sheriff’s Office’s Youth Leadership Camp. During the week, campers attending the free event will learn about a number of subjects from deputies — Tuesday’s topic was bicycle safety.

Each camper was given a bicycle helmet of their own — donated by Powles Staton Funeral Home in Rockwell, which provided 60 helmets for two of the camp’s sessions — and then took to a bicycle obstacle course set up by Salisbury’s the Pedal Factory. Bicycles for Tuesday’s activity were also provided by the Pedal Factory. Helmets for the first session were funded through a grant from N.C. Department of Transportation.

Getting students outside and moving is one of the camp’s goals, camp organizer Deputy William Walker said.

“A lot of kids nowadays are stuck inside all day,” he said.

But its other main goal is to let campers meet, and get to know, their local law enforcement. Many children don’t have a context for law enforcement outside of arrests, Walker said — the youth leadership camp seeks to break that.

“It’s an opportunity for them to have a positive interaction,” he said.

Deputies who work the camp don’t dress in uniform. They wear shorts and camp t-shirts, just like the students. And nearly all of the staff are also school resource officers.

In fact, that’s one reason the camp exists.

During the school year, the deputies spend all their time with students and are cut free for the nine weeks of summer when they’re assigned to other projects with the Sheriff’s Office. But three years ago, Walker wondered if they couldn’t do something positive for students over the summer.

“I just thought it would be kind of neat if we done something with kids,” he said.

And school resource officers are familiar with children and love working with them, why not continue that? That first year, the free camp had two week-long sessions, and was funded by a grant from the Robertson Foundation. The second year, Walker added a week, allowing 30 more children to participate.

“I guess word of mouth, and it kind of gets out.” He said.

The 2016 camps are funded by a $6,000 grant from the Salisbury Community Foundation, and Walker said grants help him keep the camps free — which can open opportunities for children from low-income families.

“As long as I can find grants to do it, I’d like to keep this camp free,” he said.

Walker said a lot of people think that the camp is just for “bad” kids, because it follows the Gang Resistance Education and Training program — a nationwide federal program that deals with issues of bullying and juvenile delinquency. But Walker said the camp is for anyone, and if it keeps some kids with mischievous inclinations occupied during the summer, that’s a bonus.

“I think it’s an opportunity for them to have something positive to do,” he said.

And the campers attending this week’s session at Erwin Middle quickly adapted to the presence of law enforcement officers, folding them into their groups and games.

“I think it’s pretty cool that the policemen do this for us,” camper Hunter wall said.

Campers taking a break from the heat in Erwin’s gym invited deputies into their games of hula-hoop and jump rope while a group started up a round of dodge ball. Wall said the camp has been fun, and has helped him break out of his shell.

“I used to not be social but now I’m making new friends,” he said.

There are still a few openings for camp’s third session, to be held Aug. 8-12 in China Grove. The camps cap at 30 students, and Walker said that there was a 12-person waiting list for the second session.

For more information contact Deputy Walker at 704-278-9233 or by e-mailing william.walker@rowancountync.gov