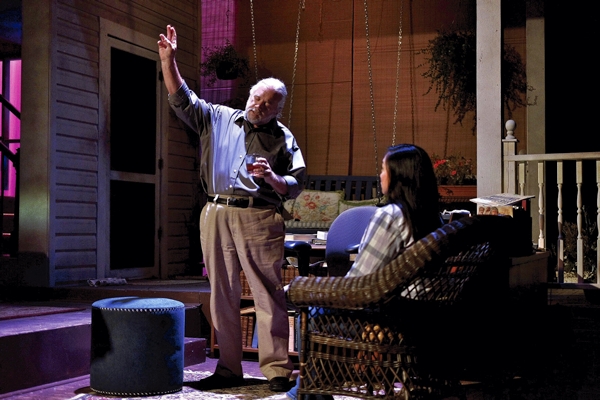 “August: Osage County” is written by Tracy Letts, directed by Dr. Kurt Corriher, and sponsored by Alfred Wilson Building Co. It won both the Pulitzer Prize and the Tony Award for Best Play in 2008. It was also adapted into a 2013 movie starring Meryl Streep and Julia Roberts.

The play centers around the large Weston family, which unexpectedly reunites after the patriarch of the family disappears. Subsequently, their Oklahoma family homestead explodes in a maelstrom of repressed truths and unsettling secrets. Mix in Violet, the drugged-up, scathingly acidic matriarch, and you’ve got a major new play that unflinchingly—and uproariously—exposes the dark side of the Midwestern American family.

Despite this darkness, the play is riddled with laughs.

“The humor is abundant and consistent throughout,” says Polly Adkins, who plays Violet. “Tracy Letts’ ingenious dialogue keeps the audience laughing, even sometimes at the darkest moments. We fully expect the audience to have fun with this totally flawed, horribly scarred family.”

“Realistically speaking, everybody is related to as least one crazy person,” says Bevis. “Everybody has some degree of family drama, unless you’re on Leave it to Beaver.”

“Of course it’s relatable, because every family has drama,” she said. “Maybe not on the scale that the Westons are experiencing, but I think everyone can relate some part of what they’ll see on stage.”

“It’s a monumental play, funny yet tragic, entertaining yet moving,” he said. “The audience immediately recognizes family dysfunction. But as time goes on, one realizes that Tracy Letts’ themes run deeper and broader. In one sense, this is a drama about America in the 20th century, about the clash of generations, about strength and weakness, about hubris and decay.”

The cast will tell you the play is better than the movie.

“I saw the movie and I appreciated it,” said Lambert. “But I will tell you the movie is very different from the play. I think the play is funnier, more relatable, and just better.”

All performances are at the Lee Street theatre and Performing Arts Center at the Tom and Martha Smith Event Center, 329 N Lee St.