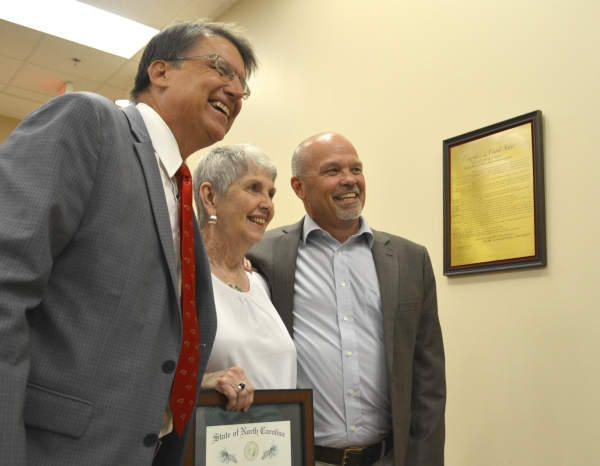 Here’s to the land of the long leaf pine,

The summer land where the sun doth shine,

Where the weak grow strong and the strong grow great,

Here’s to “down home, the Old North State!

CHINA GROVE — Sandra Rogers received the Order of the Long Leaf Pine on Wednesday afternoon from Gov. Pat McCrory. But she was more excited to see her son.

Geoff Rogers, who’d flown in from New Jersey to surprise his mom, accompanied McCrory as he entered council chambers at China Grove Town Hall. Rogers, sitting near the front, immediately jumped up to greet her son, giving him a big hug.

She didn’t know the two were there to honor her. She’d been told McCrory was in town to discuss the progress on the China Grove interchange — Rogers’ husband, the late Harry Rogers, had purchased property in that area, so she assumed that her son was there to represent the family.

Then McCrory invited her up, and presented her with the handsome, framed award. McCrory talked about her long career in education. Rogers spent more than 30 years as an elementary school teacher. Since her retirement, she and her best friend and neighbor, Becky Withers, work a couple of days a week with beginning teachers in Rowan-Salisbury Schools.

“You are the best of the best,” he told Rogers, who three times was named teacher of the year at China Grove Elementary School, and was the N.C. Teacher of the Year in 1989.

“You are so active in this community, and even in your retirement, have kept helping train teachers and helping the next generation,” McCrory said. “You are a role model of the teaching profession and a great mom.”

“All of you know how much I love teaching and education,” Rogers said. “As I look around this room, I see so many of my students who have grown up to be successful.”

McCrory then led the gathering in the state toast, as it is included on Rogers’ award.

“That’s all we came for?!” Rogers exclaimed, as the brief ceremony came to an end.

“A lot of fancy people got this award,” her son told her, beaming, as folks crowded around to congratulate Rogers.

“(Town Manager) Ken Deal just told me I was the only live person he knew who got this award!” Rogers said, still clearly stunned by the honor.

The word “surprised” did not describe her feelings, she said. “If you would have said, what would surprise you most, I would never have guessed this. It was the best surprise ever.”

Yet hearing the governor’s glowing accolades and receiving the state’s highest civilian award wasn’t the highlight of Rogers’ day.

“I’m just happy to have him here,” Rogers said, hugging her son one more time.