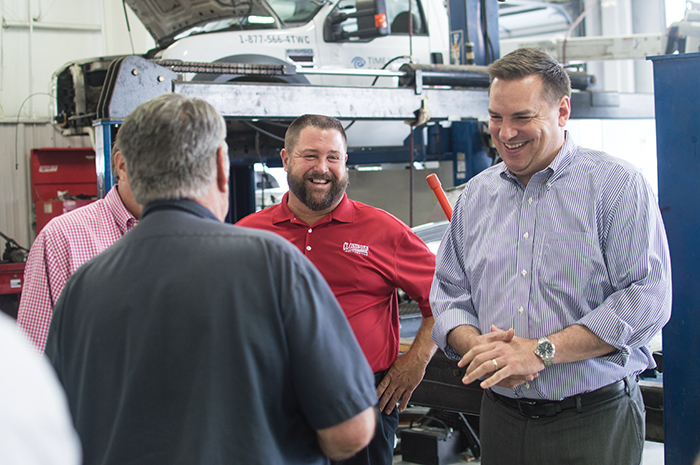 Hudson visited Cloninger Ford on Thursday to talk with owner Larry Cloninger about regulations on businesses and meet employees. In an interview at the end of his visit, Hudson said Trump needs to “start laying out a vision” and “talking about issues.”

“I think we (Republicans) want this to be a battle of ideas because I think, as conservatives, we have the ideas to fix the things that are wrong with this country,” he said.

When asked for specific areas Trump could focus on, Hudson mentioned health care, the economy and national security. Because Republicans and Democrats have different ideas about a number of issues, Hudson said, it’s important Trump stresses differences in policy positions between himself and presumptive Democratic nominee Hillary Clinton.

For example, on health care — a topic Hudson talked extensively about during his visit with Cloninger — conservatives prefer a system that allows insurance companies to compete across state lines, Hudson said. It would increase competition and decrease costs, he said.

For his part, Cloninger called health care the most significant regulation that negatively affects his business.

Compared to Hudson’s description, Clinton has said she would defend and expand the Affordable Care Act — frequently referred to as Obamacare. The health care law is one that many Republicans hope to repeal and replace.

“I think it’s important that we explain it to the American people because I don’t think we’ve done a good job of explaining our vision on health care,” he said.

He said the same applies on economic and national security issues — Trump needs to do a better job of laying out his specific policy ideas.

“What I’m saying, just to be clear, is not that I’m waiting to decide who I’m supporting,” Hudson said. “I’m saying that for him to win, he’s got to start talking about his proposals. … I just want him to go out and make his case to the American people.”

“Hopefully, ‘A Better Way’ would be the basis of what we would start doing together in January if he is elected,” Hudson said. “I believe Trump will pick, certainly, things in the House agenda to talk about.”

Specifically mentioning him by name, Hudson has said repeatedly that he supports Trump. Hesitant to give a full-throated endorsement, some Republicans have simply said he or she supports “the nominee.”

Although polls vary across the nation, Clinton appears to be ahead nationwide in the presidential race. The Real Clear Politics average of polls shows Clinton ahead by about 3 percentage points over Trump across America.