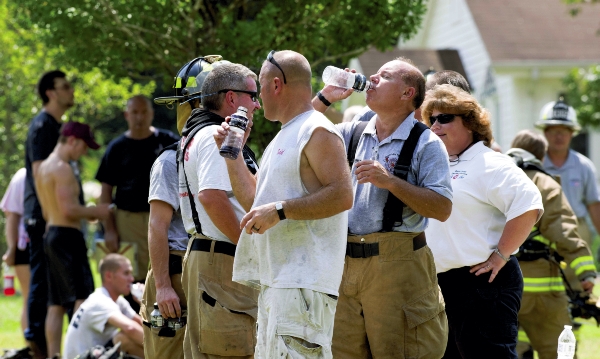 JON C. LAKEY / SALISBURY POST Bostian Fire Chief Mike Zimmerman finishes off one of the many bottles of liquids that the firefighters will intake during the course of fighting the house fire on a day when the ambient temperatures are 90 degrees. Several fire departments responded to a structure fire in the 1400 block of Pine Ridge Road on Thursday. Fire departments take extra precautions to protect firefighters from heat and exertion with frequent breaks, medical monitoring and increased fluid intake.

CHINA GROVE — A fire on Pine Ridge Road in China Grove has homeowners concerned for their future.

Bostian Heights received a call at 11:19 a.m. today and responded to a house fire in the 1400 block of Pine Ridge Road.

Steven Shuffler and Melinda Mauney bought the home two years ago, in August 2014, and had been working on renovating the old building. While the two have another place to live, Mauney said their planned future was now up in the air.

“This was supposed to be where we were gonna move,” Mauney said.

Shuffler said he was just glad no one was in the house at the time.

Bostian Heights Fire Chief Mike Zimmerman said the house should be salvageable, and confirmed that no one appeared to be living in the house at the time of the fire.

The cause of the fire is still under investigation, and Zimmerman said the fire did get into the attic. Zimmerman upgraded the initial call due to the hot day, he said, so he could limit each fireman’s time in the heat.