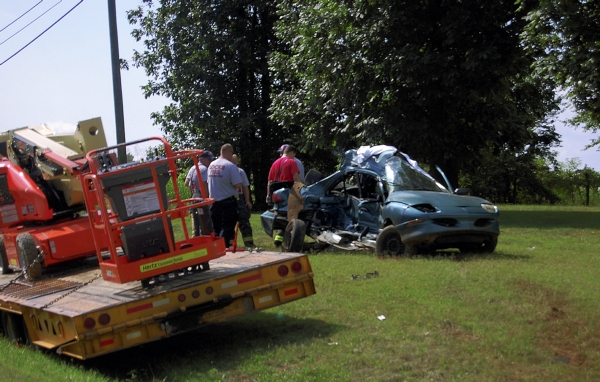 Amanda Raymond/Salisbury Post A Hertz tractor-trailer T-boned a Pontiac Sunfire after the Pontiac driver lost control on Sherrills Ford Road. The driver of the Pontiac was pronounced dead at the scene.

One person dies in accident on Sherrills Ford Road

SALISBURY — An accident on Sherrills Ford Road led to one fatality on Thursday morning.

According to Sergeant G.A. Barger, a woman travelling west on Sherrills Ford Road near Long Branch Road in a 1999 Pontiac Sunfire ran off the road to her right. She overcorrected and ran into a Hertz semitruck traveling in the opposite direction.

Barger said the driver of the truck tried to take evasive action, but ended up T-boning the Pontiac.

The Rowan County Rescue Squad and Locke Township Fire Department were also at the scene.

Barger said he has seen a trend of drivers running off of the road to the right like the Pontiac driver did.

The name of the Pontiac driver has not yet been released.

By Shavonne Walker shavonne.walker@salisburypost.com SALISBURY — A group of women gathered in the Hurley Room of the Rowan Public Library... read more

Granite Fest makes a comeback with music, vendors and fun for kids