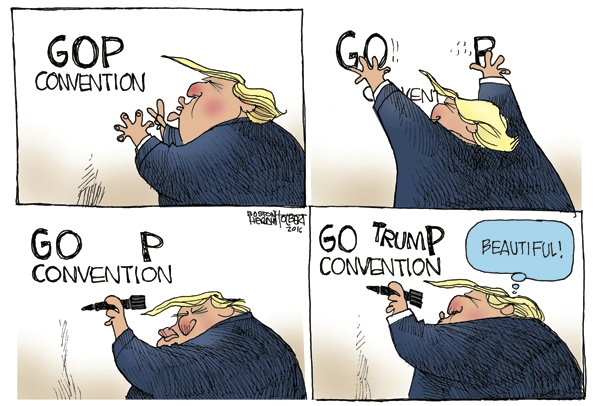 CLEVELAND, Ohio — Major American political parties are stable institutions. Warren G. Harding can come and go, and he’s succeeded by Calvin Coolidge and then Herbert Hoover, and you would need an electron microscope to discern any change in the party.

This is why Donald J. Trump — “an agent for change,” former New York Mayor Rudolph Giuliani called him from the convention podium — is such a remarkable, formidable and possibly transformative Republican presidential nominee. He has the potential to change everything — the presidency, the way aspiring nominees campaign for the job, and the Republican Party itself, which this year is celebrating its 160th birthday.

The GOP is undergoing a profound change that has within it the possibility of altering American politics for a decade, if not a generation.

• One scenario is that Trump wins in November and the whole architecture that has sustained the Republican Party since the Nixon years collapses.

• Another scenario is that he is defeated and the party reverts to a Republican restoration, with the 2020 nominee looking like the lost little brother or sister of Mitt Romney or former Gov. George Pataki of New York.

• A third is that his defeat leads to a GOP Kulturkampf, with Tea Party hardliners, strengthened because they are re-elected in safe House districts in the fall, having a larger proportional role in a vastly diminished Republican coalition.

If Trump does become president, he may play the role of Franklin Roosevelt in 1932 and Ronald Reagan in 1980, both of whom transformed the demographic profile of their respective parties. Both appealed to blue-collar workers. The difference in 2016 is that these new Republicans possess anger and alienation of a sharply different character than the rump of the party they are joining.

Establishment Republicans and Tea Party conservatives have little in common besides their contempt, part substantive and part stylistic, for Trump’s brand of politics. Neither group has any affinity for former Secretary of State Hillary Clinton, but neither group has a stake in Trump prevailing. Both look forward to a Trump collapse as an opportunity to pick up the pieces — the establishment Republicans hoping to return to the regular practice of nominating worthy Republican governors with solid records, and the Freedom Caucus Republicans hoping to purge the party from its “me too” attitude and imposing a rigid conservative orthodoxy.

That’s why Gov. Mike Pence of Indiana, Trump’s running mate, was such a balm to the party. Trump partisans like him because their candidate covered him with stardust, the regulars because he has conventional experience in the House and as a governor, and the conservatives because he is one of them. In his time as head of the conservative Republican Study Committee, Pence referred to himself as “Rush Limbaugh on decaf.” The conservatives liked the first two words, the regulars the last two.

Trump carried 36 states and won 13.4 million votes on his way to the GOP nomination, but he took a smaller percentage of primary and caucus votes than Romney in 2012 or Sen. John McCain of Arizona in 2008. Yet for all Romney’s business orientation and McCain’s maverick streak, neither possessed the potential, ability or inclination to change the Republican Party.

Trump, who speaks of making America great and is in the process of remaking the GOP, possesses all three, and he takes them into a race essential for the Republican Party, which has been shut out of the White House for eight years. Back in October, Republican chairman Reince Priebus, worried that the GOP does well in midterm elections but is endangered in presidential elections, said, “We’re cooked as a party for quite a while if we don’t win in 2016.”

Trump is one of those rare presidential nominees who has the potential of winning the White House but also of being defeated decisively.

A defeat would warn the Republicans away from nominating a candidate like Trump again. A victory would remold the party in Trump’s image — and the long-term effect of that cannot be predicted.

David M. Shribman is executive editor of the Post-Gazette.