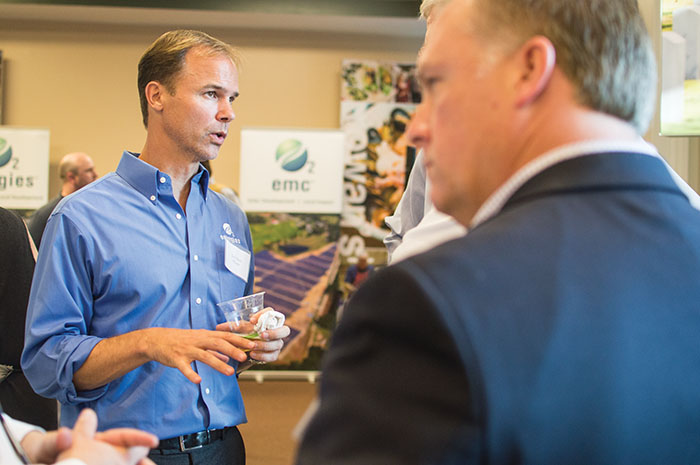 SALISBURY — A Cornelius-based company on Tuesday announced its plans to build solar farms in the Mount Ulla area and near Dunn’s Mountain Park that would power more than 800 homes each.

The solar farms would the the latest of several located in Rowan County and the second and third for O2 EMC — a company that develops and operates a total of 17 solar farms. Both solar farms will have a 5 megawatt capacity, which CEO Joel Olsen estimates said would be enough to power 860 homes annually.

In his presentation, Olsen stressed that O2 EMC focuses on using local labor and partnering with local businesses for its projects. He said the latest projects have been easier because O2 EMC already operates a site in Rockwell.

The Mount Ulla solar farm is proposed for a tract of land on Graham Road between NC 801 and Back Creek. The site near Dunn’s Mountain Park is proposed for 2060 Dunn’s Mountain Road. Construction on both sites isn’t projected to start until 2017, Olsen said. Paperwork currently pending with Duke Energy is holding up the project, he said.

“When you find a suitable piece of property that does not have water and sewer or great road access, I think it’s a great opportunity for the property owner and to grow our tax base,” Van Geons said.

At both sites, Olsen estimates the property value will increase by about $3 million. He said Rowan County has already seen hundreds of thousands of dollars in additional tax revenue because of the company’s existing solar farm in Rockwell.

“I think between the two of these projects, if you include Rockwell, we would be adding up to $8 million to the tax base here in Rowan County with no services required,” he said.

“It’s not a golf course and it’s not a finely manicured lawn. It’s a pasture,” Olsen said about the company’s existing solar site in Rockwell. “It can have weeds, long grass at times and short grass at times. The important thing is that the pasture is food for the sheep. So, it’s not always going to be beautiful, but it is going to serve a dual purpose.”

During Tuesday’s announcement, Olsen was talking to supporters of solar farms and alternative energy. However, he spent a segment of his presentation addressing criticisms of solar energy. For example, he said there’s no evidence that adjacent property values decline because of solar projects. He said solar farms also don’t harm farmland. Once solar panels are removed, land can easily be transitioned back to farmland, he said.