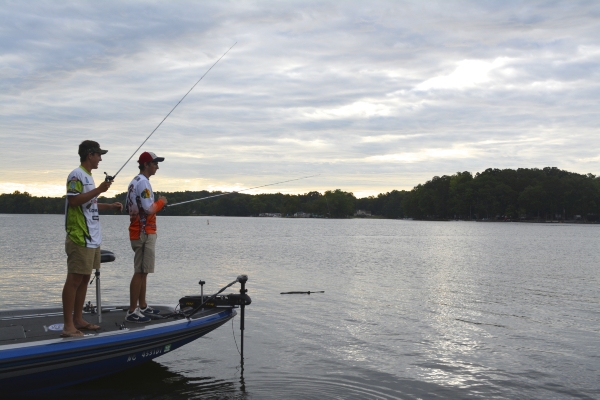 The sun has just peeked through the cloud cover, making what could be a hot morning pleasantly cool. The water is calm as Grayson Whicker and Bobby Bauer cast their lines near the pier at Tamarac Marina.

The young men will be doing plenty of practicing the next couple of weeks. Grayson and Bobby, both 18 and both 2016 graduates of Carson High School — and members of the school’s Outdoors Team — will be competing in the Bassmaster High School Championship and Junior Championship Aug. 2-6 at Kentucky Lake in Paris, Tenn.

Also making the trip will be Ben Bauer, 12, Bobby’s younger brother, who’s the middle-school state champion. Bobby and Ben’s mom is Rose, and they have a sister, Brieanna, 16, who’s a softball player.

North Carolina is sending two other high school teams, both based in Charlotte.

Grayson, Bobby and Ben are each on two-man teams, and they’re looking to raise $2,000 per team to participate in the event. Volunteers are also welcome at the school and state level, and the Bauers’ dad, Bob, would love to see more fishing teams in Rowan County schools participate. Each school needs a staff member who would serve as the team advisor.

At Carson, Jason Stanley serves as the advisor for the Outdoors Club, which includes students participating in hunting and archery as well as on the fishing team. The competitive fishing season runs October-June, with tournaments most every Saturday.

Fishing runs deep in both families.

“Before Bobby was born, I used to tournament fish,” says Bob, who serves as state director for high-school fishing. “When he was about 3, I rented a john boat, and he really liked it.”

Bob says Ben will fish until all the bait is gone.

“I just like being outside,” says Bobby, who will attend Rowan-Cabarrus Community College this fall. “There’s nothing like catching a fish on topwater. You can actually see the fish come up and get the bait.”

The boys will arrive a few days early to practice and get to know the lake, which is some 180 miles long.

Locally, Bobby says that Badin is his favorite lake. “That’s where I’ve caught most of my fish and won most tournaments.”

He says he wants to start a fishing team at RCCC, as there is collegiate-level fishing available.

Ben will be an eighth-grader at China Grove Middle School, and says he plans to be on the Carson team.

“To feel the fish pull against the line is exciting,” he says.

Grayson also grew up fishing, and his uncle, Chris Corriher, got him interested in bass fishing as a teen.

Grayson is the son of Phillip and Chandra Whicker, and his sister, Natalie, 20, is a student at High Point University. Grayson says his dad likes to fish at the mountains and the beach. But he and his uncle share a love of bass fishing, and his uncle serves as his boat captain for tournaments.

Chris has fished his whole life, having started with his dad and granddad, and zeroing in on bass fishing at 13.

“We just have fun with it,” he says of fishing with Grayson. His own children, Lynsey and Cameron, prefer fishing at the Outer Banks.

“There’s the element of competition that I like,” Chris says of tournaments. “You’re competing with the fish, and the people out there on that day.”

He adds, “There’s just a peace and serenity of getting out on the water. Everybody has problems, but it’s just peaceful to get away and fish for a few hours.”

Grayson is headed to the University of North Carolina this fall to major in business.

Before that, the young men are setting their sites on the national tournament. Top winners receive college scholarship money.

True South Custom Lures is providing the local teams with bait. They have stacks and stacks of plastic boxes with all sorts of lures. The guys fish with Duckett rods, which Bobby says are lightweight.

Grayson is still trying to find a partner for the tournament, but Bobby’s partner is C.J. Guest of Shelby. Ben’s partner is Hunter White of Black Mountain. They’re the only middle-school team from North Carolina participating in the national tournament.

“If they do it once, they always come back,” he notes.

Bobby’s biggest catch was a 9-pound bass. Grayson caught a 6½–pounder in the state tournament.

“It was good timing,” he says.

“You did it the easy way,” his big brother says, teasing him.

“There’s still some competition there,” their dad says.

If you’d like to know more about team sponsorships, volunteering, or advising a local high-school team, contact Bob Bauer at 336-972-0393 or bbauer42@yahoo.com