So many new breweries, book had to be updated 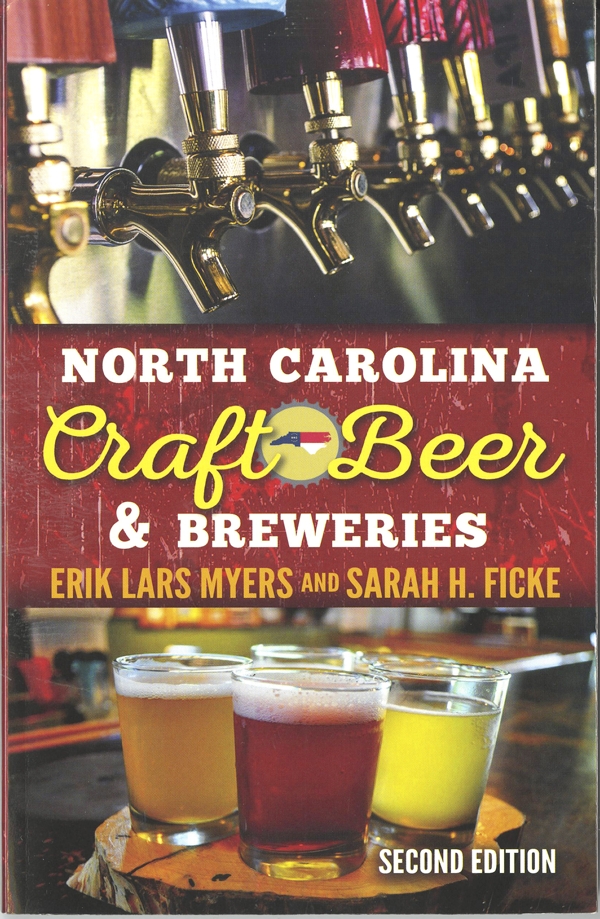 First published in 2012, "North Carolina Craft Beer & Breweries" is now in its second edition due to the growth of the industry.

With a new craft brewery open and a second one coming this summer, Salisbury has joined the crowd of North Carolina towns and cities making bank on beer.

New Sarum has been a popular place ever since it opened in April. Morgan Ridge Brewhouse is nearing completion nearby and the two breweries see sunny skies and thirsty customers ahead.

Unfortunately, they’re so new they didn’t make it into the second edition of “North Carolinal Craft Beer & Breweries,” by Erik Lars Myers and Sarah H. Ficke.

The first edition came out in 2012, and since then, craft brewing is becoming almost as popular as winemaking in our state. The authors may have to consider another update in two years, instead of four.

This edition is much like the previous one, except there are many more entries, and the one complaint would be that many of those entries do not describe what style of beer these breweries specialize in. The larger breweries, such as Foothills and Mother Earth, get larger write-ups, with more details.

A very short entry mentions Morgan Ridge and their small system at the Gold Hill winery, but does not hint at what kind of beer is available.

Also note that Myers owns Mystery Brewing Co. in Hillsborough, and it gets a longer entry, too. Myers is also the president of the North Carolina Craft Brewers. Ficke has a Ph.D. from UNC-Chapel Hill and teaches at Marymount University in Arlington, Va.

The book is laid out by region, so the mountains is one region. The Charlotte area is another, along with the Triad and the Triangle. The eastern counties make up a region, as well.

The history of beer and brewing section is worth a read, telling us that in Colonial times, beer was imported from the North or Britain, while North Carolinians made cider. It was tough to grow the grains required for beer making.

After the Revolutionary War and up to the Civil War, things changed, and that’s where Salisbury comes in. We have been called “the wettest and wickedest town” by more than one author, and there is plenty of evidence to see why.

One Thomas Holmes of Salisbury is mentioned in the newspaper Western Carolinian by way of advertising for his public house in 1821. The authors found that by 1822, he was advertising for barley for his brewhouse and in 1823, he was looking for hops.

He kept advertising until 1827, when he announced he was moving to establish a “house of entertainment.”

That’s the last time he was mentioned by name in the Western Carolinian, but in 1828, there was a story about a respectable gentleman who “fitted up a brewery here.” The newspaper went on to say “the Beer and Porter produced at this establishment, was superior to any liquor of the kind ever manufactured in this part of the country.”

The authors provide descriptions of different styles of beer and then launch into an establishment-by-establishment listing, from west to east.

Each brewers emblem is displayed and there’s a small photo, along with hours and a code indicating if the beer is on tap, available in growlers, if they offer food and if the place is kid-friendly.

You could certainly plan a brewery tour by using this book. You could spend a week in Asheville and probably not have time to try all the craft brews offered. Charlotte is also a hub of breweries, as is the Triangle.

The authors, in some cases, spoke to the founders or owners of the breweries, and describe what the spaces look like. Others do not get much in the way of description, but the number of breweries is daunting for two people to cover.

With phone numbers, emails, websites and hours listed, finding out more about the breweries wouldn’t be too hard if you’re planning a tour.

Some breweries, such as Morgan Ridge, offer flights — tastings of the brews or some of the brews available. If you’re traveling around tasting, be sure to designate a sober driver and don’t try to visit too many places in one day. Pick two or three and spend some time getting to know the place.

Summer is definitely beer season, so pick up a copy and go see what’s out there.

The book is published by John F. Blairi, Publisher, in Winston-Salem and is $19.95.