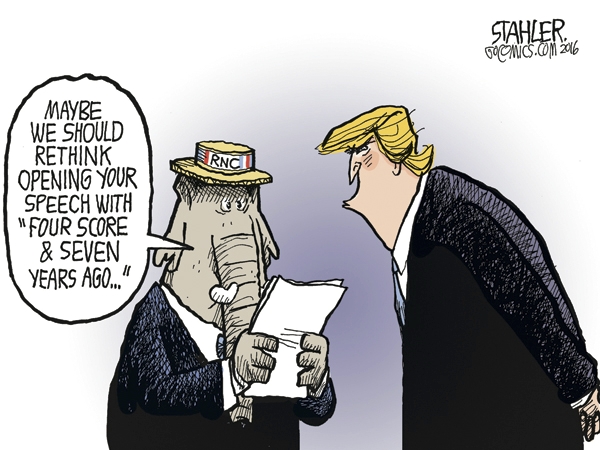 Excerpts from commentary around the country:

… Plagiarism offers a window into a different aspect of Trump, one that isn’t integral to his appeal. Trump is a phony. And a lazy one at that. He refuses to put in the work, and if he becomes president the consequences are likely to be disastrous and unpredictable.

Just ask his wife who stood up on a nationally broadcast primetime telecast to vouch for his integrity and decency, and turns out to have been set up for humiliation because Trump couldn’t be bothered to build the kind of professional presidential campaign that would equip Melania Trump with a decent speech.

Good woman: Melania Trump’s opening night speech at the RNC was everything it needed to be. This plagiarism mini-scandal threatens to derail media coverage of much of the convention unless Donald Trump does the right thing — both ethically and politically — and tells Paul Manafort to stop acting the mafia henchman part he dresses for, protecting his “made man” inside the campaign regardless of that person’s misdeeds.

A head needs to roll.

In the meantime, a good woman is paying the price.

Perfect match: Melania’s remarks were a reminder of the way in which a man who has had three families is somehow being presented to voters as the ultimate family man. …

Indeed, the most interesting aspect of what she had to say came hours afterward, as more and more people began to notice and plumb striking similarities between a few of her sentences and a few of those in Michelle Obama’s convention speech in 2008. Both spoke of parents who impressed on their children that “your word is your bond.” Other phrases and thoughts from Obama’s speech recurred in Melania’s.

For the most part, though, Melania simply stated over and over again what a one-of-a-kind talent her husband is and what an amazing president he’d be. Her language didn’t vary much, her details were few and her evidence, to the extent that she provided any, wasn’t particularly compelling. She’s his perfect match, not just in love but in vagueness.

Revealing: T.S. Eliot wrote, apocryphally, that good poets borrow and great poets steal, which perhaps explains why Melania Trump’s address Monday was the only memorable moment of the Republican convention’s first evening. The Tuesday-morning furor over the passage that Mrs. Trump’s speechwriters apparently lifted from Michelle Obama will dissipate, though the episode is troubling for what it reveals about the campaign’s lack of organization and quality control. …

Though Mr. Trump emerged from what appeared to be a neon-lit spaceship doorway for a surprise introduction that was unlisted on the official schedule, his remarks were brief and surprisingly modest.  …

If Mr. Trump’s team can’t manage an incident-free convention, where they control who appears and what they say, the unpredictable fall campaign will be even more of an adventure.