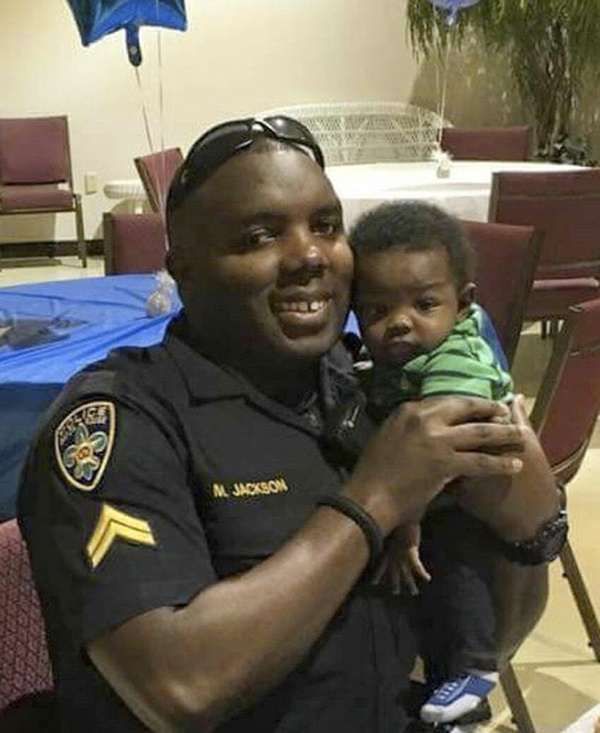 How can anyone ever explain this to Mason?

He’s only 4 months old, so that moment still lies years in the future. Still, at some point, too soon, he will ask the inevitable questions, and someone will have to tell him how his dad was shot to death for being a police officer in Baton Rouge.

Montrell Jackson was not the only cop killed Sunday, nor the only one who left a child behind. Officer Matthew Gerald and Sheriff’s Deputy Brad Garafolo also had kids. And it’s likely that in killing five police officers earlier this month, a sniper in Dallas robbed multiple children of their fathers, too.

So there are a lot of people having painful discussions with a lot of kids just now. But Mason’s father was the only one of these eight dead cops with the maddening and paradoxical distinction of being an African-American man killed in protest of police violence against African-American people. He left a Facebook post that gave a glimpse into how frustrating it was, living on both sides of that line — being both black and a cop and therefore, doubly distrusted.

“I swear to God,” he wrote, “I love this city but I wonder if this city loves me. In uniform I get nasty hateful looks and out of uniform some consider me a threat.”

Nine days later, he was dead.

Counting two New York City policemen murdered in 2014, this makes at least 10 cops randomly killed in the last two years by people ostensibly fighting police brutality. But those madmen could hardly be bigger traitors to that cause.

One is reminded of something Martin Luther King said the night before his assassination, when he explained “the problem with a little violence.” Namely, it changes the discussion, makes itself the focus. King had been protesting on behalf of striking sanitation workers in Memphis when unruly young people turned his march into a riot. “Now … we’ve got to march again,” he said, “in order to put the issue where it is supposed to be.”

These cop killers leave us a similar dilemma. Instead of discussing the violence of police, we are now required to discuss violence against police and to say the obvious: These killers serve no cause, nor does any cause justify what they did. They are just punk cowards with guns who have changed the subject, thereby giving aid and comfort to those who’d rather not confront the issue in the first place.

But if we don’t, then what? One often hears men like Rudy Giuliani and Bill O’Reilly express contempt for the Black Lives Matter movement of protest and civil disobedience; one is less likely to hear either of them specify what other means of protest they would suggest for people whose concerns about racially biased and extralegal policing have been otherwise ignored for decades by government and media. If not Black Lives Matter, then what? Patient silence? Acceptance of the status quo?

That isn’t going to happen, and the sooner the nation understands this, the sooner it moves forward. Sadly, that move, whenever it comes, will be too late for Mason and dozens of others left newly fatherless, sonless, brotherless, husbandless and bereft. Still, we have to move. The alternative is to remain stuck in this place of incoherence, fear, racial resentment … and rage. Always rage.

Jocelyn Jackson, Montrell’s sister, put it best in an interview with the Washington Post. “It’s getting to the point where no lives matter,” she said.