Jerry Stokes sworn in as chief of Salisbury Police Department 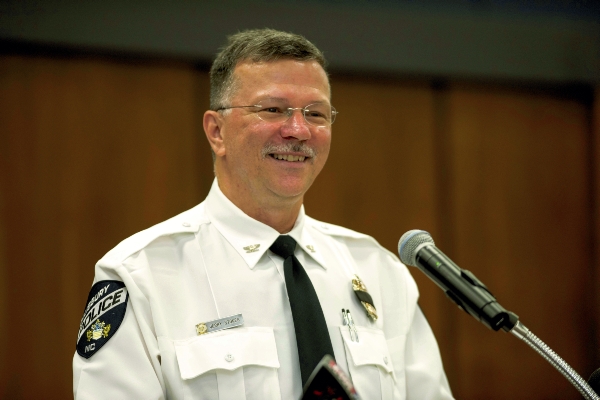 Stokes was introduced to the City Council at a meeting on June 7. His last position was deputy chief of the Lynchburg, Virginia, Police Department, a department he was with for more than 30 years.

Mayor Karen Alexander, Mayor Pro Tem Maggie Blackwell and the City Council members, along with other community and business leaders, gathered with community members to greet and talk with Stokes during the drop-in reception.

“Capt. Stallings did a wonderful job leading us through this period of transition,” he said.

After the ceremony, Stallings said he was happy for Stokes. He said he spent his time as interim chief preparing the way for the new chief to step in.

“I wouldn’t have done it if I didn’t love the department and the city,” he said.

Bailey acknowledged the events that have gained national attention in the past couple of weeks, including the deaths of Alton Sterling and Philando Castile, who were shot by police officers, and the deaths of police in shootings in Dallas, Texas and Baton Rouge, Louisiana.

“I can’t imagine a more challenging time to be a police officer or to assume the role as police chief, and I think at this time it’s just essential that we figure out ways to bring our community together,” Bailey said.

He said the ability to bring community policing to Salisbury was the number one quality he looked for in the new chief.

After a prayer by police chaplain Harvey Rice, Mayor Alexander administered the oath of office.

“We believe all of our citizens deserve to feel safe and protected in their individual neighborhoods,” Alexander said. “We believe that with more recognized and extensive experience and leadership and community policing experience, that together (Stokes) with our community can create a community policing model that is citizen-centric and a model for the nation.”

Stokes was given a chance to speak and thanked the mayor, council and city manager, as well as his co-workers from the Lynchburg Police Department who attended the ceremony.

Stokes said he felt welcomed by the community and police department and he was looking forward to working with everyone.

He, too, acknowledged recent national events, as well as local events in Salisbury including unsolved murders, structural reorganization and firings.

“Every time you pass a police officer, you should thank God. Those men and women are doing a difficult job in very difficult times with all the professionalism and caring possible,” Stokes said.

He said the community must partner with the police, get involved and “act when we see injustice.”

Stokes said embracing “community-based, problem-oriented policing strategies” is his priority for the police department. He said the strategies will emphasize neighborhood support and sustainability.

At the end of his remarks, Stokes said he wants the department to be “servant-leaders in the community” and listen to the community’s concerns.

“I’m appreciative of this opportunity, and look forward to the future in Salisbury,” he said.