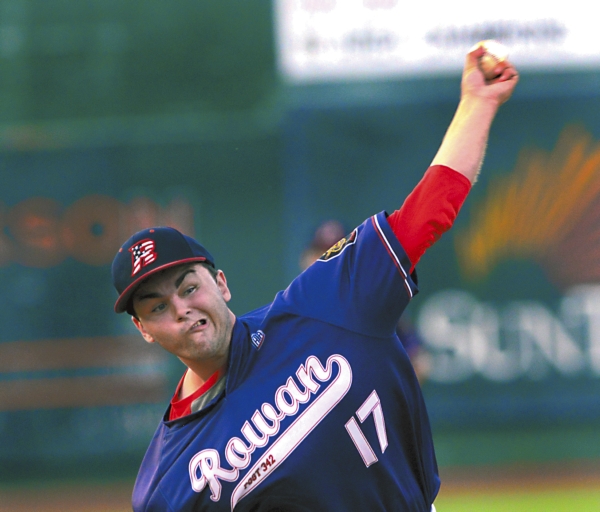 THOMASVILLE — Area III finals have been just about a 50/50 proposition for the Rowan County American Legion program.
The program has won 18 area championships, but it settled for its 17th runner-up finish on Monday with a 2-1 loss at High Point.
High Point Post 87 (24-5) won the short series two games to one, beat Rowan for the fifth time in six tries this season, and now has won four of the last six Area III championships. High Point was runner-up in Area III and in the state tournament to Rowan County last season.
In contrast to Sunday’s ugly, 10-8 loss to High Point at Newman Park, Rowan (28-11) played well defensively. Rowan’s pitching, especially starter Brandon White, who carried his team into the sixth inning before exiting in a 1-all game, was good enough to win, but Rowan hurlers did walk eight batters.
Reliever Caleb Link issued two walks but got Rowan out of a tough spot in the sixth.
“We had to pitch out of a lot of tough situations, but our pitchers did well,” Rowan coach Jim Gantt said. “Brandon did a really good job.”
Rowan’s offense, which was hurt by two pickoffs and another baserunning mistake, couldn’t do anything after the first inning when Chandler Blackwelder’s single, two steals, and Lee Poteat’s double gave Rowan a quick, 1-0 lead.
High Point made it 1-1 in the third when Evan Edwards got a run home with a groundout.
Rowan reliever Hunter Shepherd pitched out of a serious jam in the eighth inning to keep the game at 1-all. He got a strikeout with runners at second and third and one out, and the inning ended on a running catch in center field by Blackwelder.
But Shepherd couldn’t hold High Point off in the bottom of the ninth. The outcome eventually hinged on a disputed call on a rundown play.
Andrew Ramirez got an infield hit to start the ninth. Rowan had him picked off first, but after several throws in an extended rundown, Ramirez was ruled safe at second base, and Gantt came roaring out of the Rowan dugout.
“We’ve got the guy picked off, and he went out of the baseline,” Gantt said. “He’s got to be out. You can’t just run into right field.”
When No. 9 hitter Luke Spiva singled, High Point had runners at first and third with none out. Then leadoff man Nick Goard hit a groundball. Rowan got the out at first, with Spiva moving to second. Then an intentional walk to Edwards filled the bases.
“We pitched around Edwards,” Gantt said. “We look at him as their best hitter.”
Kip Brandenburg popped up to shallow center, and Rowan was one out away from getting out of it and moving on to extra innings.
Dylan Wilkinson, who was on the mound as a reliever, was at the plate next for High Point.
“If we could have gotten ahead of him, it would’ve put a lot of pressure on them,” Gantt said. “But we couldn’t get ahead.”
Instead Shepherd got way behind — 3-and-0 — before delivering strike one.
The 3-and-1 pitch created excitement and provided an unexpected chance for Rowan to get out of the inning. Shepherd’s pitch was borderline, maybe a little high, but it was called strike two. Ramirez, running from third, was so certain it was a game-ending ball four that he came jogging well down the line. But Rowan didn’t notice him in time, Ramirez was able to scramble back to third safely, and an opportunity was missed.
Then Wilkinson decided the game, the series and the No. 1 seed from Area III on the 3-and-2 pitch. It was a pretty good pitch by Shepherd, in on the big lefty hitter’s fists, but Wilkinson was strong enough to muscle the ball for the game-winning single.
“He got jammed,” Gantt said. “But he hit it good enough.”
Rowan will play in the state tournament on Friday at Wingate. Providing the first-round opposition will be Area II champion Wilmington, a 10-time state champ. Wilmington beat Whiteville, 6-1, in the Area II seed game on Monday.
Gantt said right-hander John Owen or southpaw Bryan Ketchie will pitch Game 1 in the state tournament for Rowan, a decision that will be influenced by the number of lefty hitters in the Wilmington lineup.
High Point will be play in the 9:30 a.m. game on Friday against Caldwell County. Caldwell lost 10-0 to Union County in the Area IV championship game.