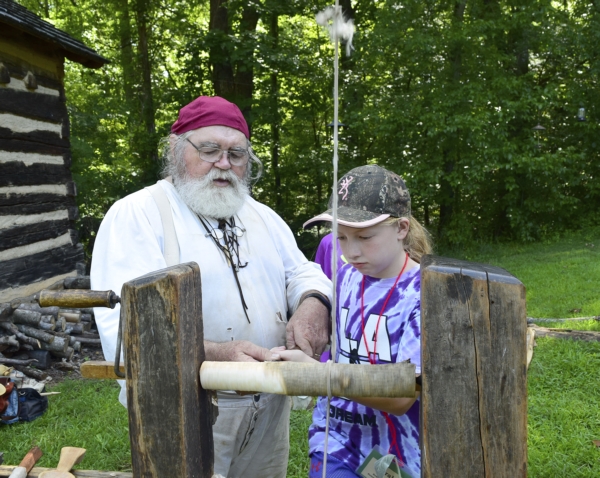 GRANITE QUARRY — Kaye Brown Hirst said that the Rowan Museum’s colonial camp for middle schoolers is advertised as “the dirtiest camp in town.” And throughout the week, campers do get pretty grubby. They may track in dirt from the garden at the Old Stone House, or ash from a cooking fire, and their clothes end up splattered with candle wax, India ink and enamel paint.

But it’s a week that keeps campers coming back, year after year, organizers said. Education Coordinator Tricia Creel said that entire families will make their way through the Rowan Museum’s four summer camps – older siblings bring their younger brothers and sisters, and when they age out, they find ways to participate.

“When they get out of camp, they can’t stand it,” Hirst, former director of the Rowan Museum, said.

So they come back as counselors or teachers, showing a fresh batch of faces how to dip candles, shape wood on a lathe or plant pumpkins in the vegetable patch. And since the camp has been running since 1999, it’s collected quire a few veteran counselors.

Campers spend the week learning what life was like around the time of the Revolutionary War. In addition to hauling water and learning how often they can reload a musket when facing a marching army, campers also learn bits of local history, and to connect their own roots with the “bigger picture” that they may learn in school.

And it captivates campers’ attention.

This is Sokolowski’s third year at the colonial camp, and she said she enjoys all the places the camp visits – like the Old Stone House, or a trip to enamel-paint a fence. On Wednesday’s visit to the Old Stone House, Sokolowski clustered with a group of friends she made at camp, shredding apples to be cooked over an open fire.

“It just kinda teaches ‘em how to do things the old way,” Kepley said.

Later in the week, campers will also spend the night at the Rowan Museum and write using the persona of a colonial Rowan County resident.

“It brings it to life, I think,” Creel said. “It makes it personal.”

A colonial camp for elementary-aged children will be held Aug. 8-12, and the museum’s Civil War camp for middle school students will run July 25-29. Call the Rowan Museum at 704-633-5946 for more information.