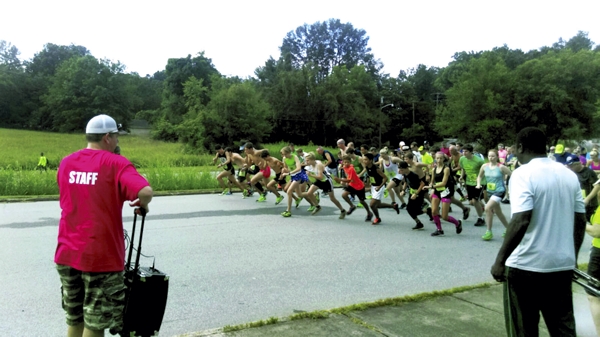 Runners get under way at the start of the 19th Annual 5K for Greenway. Photo by Rebecca Little.

According to quite a few participants, the 19th Annual 5K for Greenway run and fun run was another great one. Race Director Steve Clark was pleased with the turnout Saturday morning and said everything went very well. He was especially thankful for the help from all of the volunteers.

Cloudy skies held back the heat long enough for participants to cross the finish line. For a run in the middle of the summer, it was quite a welcome change. Melvin Morrison, the cross country track coach at East Gaston High School, gave a great presentation of the National Anthem on his bugle to start the runners. Then, to keep him in the spotlight, two of his runners took the win in both adult classes. Landon Maxwell led the men with a time of 17:26. He said he liked the course, finding it flat and fast. He also said he didn’t really push it, using the run mostly as a training run for the summer. Fellow runner Olivia Humphrey led the women with a time of 21:48. She also commented on the relatively flat and easy course. Natalie Aswell looked like a pro as she sprinted the ½-mile fun run in 3:53 to claim the win.

Major sponsors for the race were Novant Health, Totalmotion Therapy, and James K. Jolly, DDS. Others were Vac & Dash, Apple Baking Company, Biscuitville, and Krispy Kreme. Complete results can be found at www.salisburyrowanrunners.org.