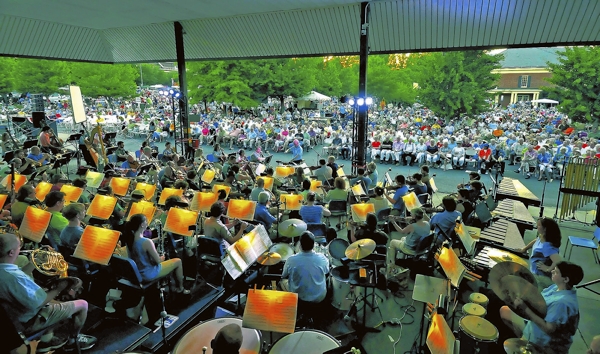 The Salisbury Symphony performs during the 2011 Pops at the Post concert, a relatively new tradition in the organization’s 50-year history. File photo by Wayne Hinshaw SALISBURY — The Salisbury Symphony’s season is gonna be golden.

Or, as Maestro David Hagy says, “It’s really to shock and awe.”

And why not? After 50 years, it’s definitely time to celebrate, and the season’s sponsors are Fred and Alice Stanback.

The program will feature the N.C. premiere of “Dreamtime Ancestors” by Chris Theofanidis, “Don Juan” by Strauss, and Beethoven’s Piano Concerto No. 5, “The Emperor, with guest soloist Frederic Chiu. This concert is sponsored by Mary Messinger.

The opening work is part of the Made in America commission, with an orchestra performing in every state.

“We have been the orchestra for North Carolina for three Made in America commissions,” notes Hagy, who’s beginning his 29th year with the symphony.

The three-movement piece is a modern work, Hagy says. “It needs to awe. It needs to prove to this community what the orchestra has become in 50 years.”

Hagy calls “Don Juan” among the single hardest pieces the orchestra has ever attempted.

Next in the season’s line-up is “Look Who’s Joining Us,” a family concert slated for Keppel on Feb. 4, 2017. Since it’s a family concert, it will take place at 4 p.m. This concert will feature the Rowan County Fifth Grade Honors Chorus, members of the All-County Band, and the Rowan Youth Orchestra. This concert is sponsored by Bill and Nancy Stanback.

Hagy notes that the Fifth Grade Honors Chorus is celebrating its 26th year, as it was formed as part of the symphony’s 25th anniversary celebration.

“Our State’s Finest” is set for March 9 at Keppel with the N.C. Symphony, conducted by David Glover. They will present “Jubilation Overture” by Ward, “Lo,” by Caroline Shaw, and Tchaikovsky’s Symphony No. 4. This concert is sponsored by Cloninger Ford-Toyota-Scion.

In “Monumental” on Palm Sunday, April 9, 2017, at Keppel, the symphony will present Verdi’s “Requiem” with multiple choirs.

The symphony presents an all-Gershwin program with “Gershwin,” May 13, 2017, on the campus of Livingstone College at Varick Auditorium. Pianist Nate Beversluis will be featured on Piano Concerto in F. The evening also includes “Cuban Overture” and Gershwin songs. This concert is sponsored by Jeffery, Melissa and Jordan Warren.

Also part of the 50th anniversary season is “The Nutcracker,” with Piedmont Dance Theater Dec. 17-18 and Keppel, and Pops at the Post, June 3, 2017, in Downtown Salisbury.

The theme for the 13th annual Pops at the Post, Hagy says, is “Luck.”

“We will be celebrating the luck of our community in having an orchestra for 50 years,” he says.

By Morgan Watts Rowan Cooperative Extension SALISBURY — I’m sure everyone has noticed at this point that summer is here... read more