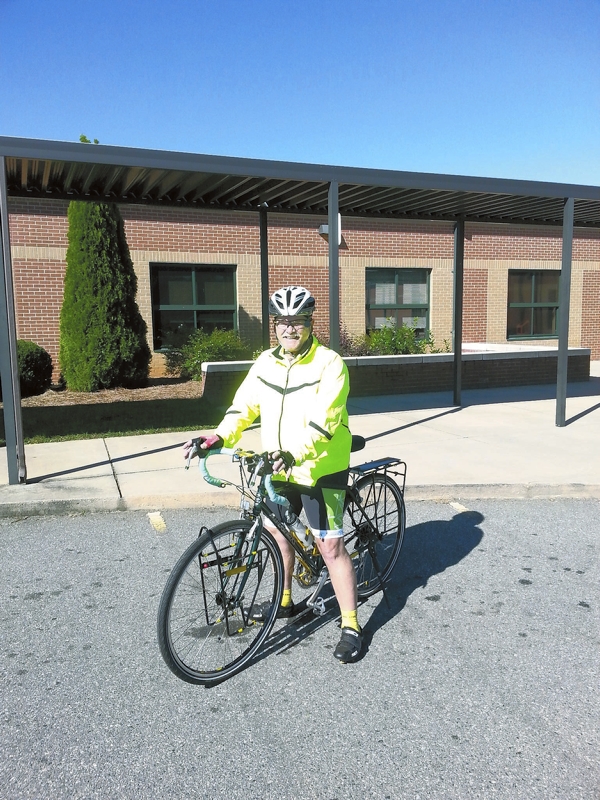 China Grove resident James Needham is back to doing the things he loves, such as cycling after having both knees replaced. Submitted photo

Pain to pedals: After having both knees replaced, James Needham is back on the road

Bike riding is his true love. But over time, osteoarthritis set in, and Needham, of China Grove, had reached a point where his knee pain and stiffness became unbearable.

The 64-year-old first noticed the pain about a decade ago. He had tried steroid injections, but they were only a temporary fix. At one point, he was taking eight to 12 Advil a day to help alleviate the excruciating pain.

“My knees have been beaten up pretty doggone good,” he said.

A plea for help

A couple of years ago, Needham scheduled an appointment with his primary care provider, Dr. Karl Barkley of Novant Health University Family Physicians. During the visit, Barkley examined his knees, and it appeared that the cartilage had deteriorated.

An X-ray confirmed the damage to his knees. Anti-inflammatory drugs, therapy, braces and other treatments didn’t bring Needham relief. He had suffered with knee pain for long enough.

“James is a very outgoing, athletic patient,” Edwards said. “He had developed progressive arthritis in both of his knees to the point that steroid injections, medications, nothing was working. His activity level and quality of life continuously decreased. He got to the point where he was gaining weight and was physically out of shape. We had tried all kinds of different non-operative measures to help him. In James’ case, he basically came to me saying, ‘Hey, I need pain relief and I need to get back to the activity level that I used to have.’”

“He and I had several conversations, and at that point, we decided he was healthy enough and had no medical problems, so we decided to do both knee replacements at the same time,” Edwards said.

A sense of relief

Needham had simultaneous bilateral knee surgery in August 2014. The week before his surgery, he ached so badly that he’d have bouts where he would break down in tears.

His knees used to crack when he walked. But now, “I feel like I’m 30 years old,” he said. “There literally is no more pain.”

He’s already recommended knee replacement surgery to his friends and even a few strangers.

He has scars on both knees, each about 8 inches long, but he hardly notices them. “He gave me my legs back,” Needham said of Edwards. “Between God, his hands and Dr. Barkley, they saved my life.”

By November of 2014, Needham was back riding again. Whether it’s hitting the road on his Trek 520 with front rear racks or cruising with his favorite green touring bike, his life is back in gear.

“I think a lot of James’ success was James,” Edwards said. “He’s a very ambitious, outgoing guy. Simply, I did the same procedure that I always do. But he attacked the rehab aggressively and did everything we asked. Now, he’s back biking and scuba diving. He is the kind of patient that every surgeon would want to have.”

Following surgery, Edwards said most knee replacement patients can expect a two- to three-day hospital stay and an eight- to 10-week recovery, including rehabilitation through physical therapy. “Most people at a year feel like they’ve recovered from the procedure,” he said.

Needham was back on a stationary bike within two weeks of his surgery. “I was determined.”

The procedure is most frequently performed on adults aged 45 and older, says the CDC. Older patients especially benefit from the pain relief and increased function.

“Commonly, what we hear is the elderly patients can’t play with their grandkids or play pickleball or golf,” Edwards said. “Now, they can get back to those activities. Once they’re able to have the mobility, they’re able to get out of the house and socialize, and enjoy their retirement years. Or, in some cases, people in their 50s and 60s are still working, so they’re able to be functional in their jobs.”

“First, I make sure they’ve maximized their non-operative options,” he said. “I would also suggest they do something such as riding a bicycle or aquatic therapy to increase their strength and endurance before the procedure. We’d make sure their primary care provider says they’re medically fit, and then we’d proceed with the knee replacement surgery at the patient’s convenience.”

Edwards said it’s important for orthopedic surgeons to partner with a patient’s primary care provider to make sure the patient’s blood pressure and heart rate are under control. All records are sent to the primary care provider and if there are any issues, he or she can better manage the issues in an outpatient setting because of the communication already established.

For a man who was told he’d never be successful, my friend William Sherrill has done well. He’s not rich... read more