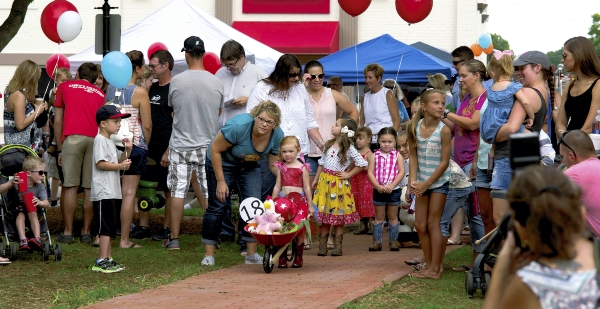 If those weren’t enough, Savannah also wore red cowboy boots because, hey, this was Farmers Day, and anything to sway the judges was fair game. Competing in the Little Miss Farmer Contest, Savannah looked forward to Farmers Day like thousands of other Rowan countians who attended this huge summer street festival Saturday.

“We woke up in pageant mode,” said Savannah’s mom, Amber. “The first thing she asked was, ‘Is it beauty pageant day?'”

There were hair, makeup and fashion things to take care of. Savannah, a contestant in the 3-5 category, also practiced posing, smiling, waving and walking in those red boots.

Gentry Byers, who will be 2 in September, competed in the Little Mr. Farmer Contest, and he rode toward the judges on his toy John Deere tractor.

Some bribery was afoot. To entice him to stay in line and wait with all the other contestants, parents Paul and Kari Byers had to promise he would receive a red balloon after he was done with the judges.

Gentry dressed for his Farmers Day event in a Ladder Co. Fire Truck T-shirt, jean shorts, a Nike ball cap and work boots. Kari said she had wanted him to wear mud boots, but Gentry didn’t think they were a good idea.

Farmers Day had a little bit of something for everyone — pageants, music, food, politicking, drawings, all kinds of vendors, classic farm equipment, China Grove Roller Mill tours and if Saturday’s evening thunderstorms passed through soon enough, street dancing and fireworks.

Taking a break on a town bench, Dean and Donna Warner said meeting people and eating kettle corn are among the things they most enjoy at Farmers Day. If there have been 35 Farmers Days, Dean said, he has been to 34 of them.

“His dad has a Farmers Day T-shirt for every year,” Donna said, “and he still wears them.”

The Warners typically like to see everything along Main Street in the morning, go home for the afternoon and return at night for the street dance and fireworks.

“We got to milk a cow today — that was on my bucket list,” Donna said. “And I like the bands, the music.”

Milking a cow was a first, too, for Jacob Tobin, 6, of Kannapolis. He visited Ms. Lucy’s Milking Booth, provided by the Fisher Ward Dairy of Lexington. Scarlett and Madison were the cows being milked Saturday, and Tobin did the honors on Scarlett.

Charles Ward was giving out some “Get More with Milk” goodie bags that included a cow face on a stick, a Got Milk wristband, a Farm to Fridge activity book, a cow key chain, a Got Milk magnet, a cow pencil and a Got Milk sticker — the mother lode for youngsters such as Tobin.

Nearby, parked in the middle of Main Street, were all kinds of classic farm tractors, sporting company names such as Ford, John Deere, Oliver, Allis Chalmers, International and Massey Ferguson.

It also was difficult for many old-timers to pass the Studebaker pickup and the 1929 American LaFrance fire truck and not have a closer look.

The same was true for kids going by the Touch of Heaven Butterflies tent, where owner Loretta Brady had brought 45 monarch butterflies with her for children to hold.

To have the butterflies come to the children’s hands, Brady gave them a makeup pad dipped in Gatorade. Sometimes the monarchs had other ideas.

“It’s on my forehead,” Rachel Russian said with delight. “It’s beautiful, I love it. I love butterflies.”

Eating some homemade ice cream, Kay Farmer of China Grove said Saturday morning’s weather was better than usual because of the overcast sky and cooler temperatures. Sometimes, Farmers Day seems like the hottest day of the year.

“We make our rounds, then go home and come back at night,” Farmer said.

You could not miss seeing the shirt Kay bought at a boutique in Salisbury that seemed to be meant for her and Farmers Day. In bold letters, it said, “Love Thy Farmer.”

Julia Lipe was waiting for her husband, Harry, after having heard the Efird Family perform Saturday morning. Harry had gone off to look at the tractors. As for the Efird Family, “they’re great,” Julia said. “They were so good.”

Like the Warners and Farmer, Julia said she and Harry always come early on Farmers Day and walk down one side of the street, then go back the opposite way on the other.

One thing you haven’t always seen at Farmers Day, because it was a first this year, was Fort Reaper Laser Tag — a chance to shoot zombies lurking around in a 600-square-foot house T.J. Jenkins built for the festival.

In the past, Jenkins, owner of  Reaper’s Realm, has operated a haunted house at Farmers Day, but Fort Reaper is an introduction to the Fort Reaper Tactical Laser Tag he will be putting into a section of the former Tuscarora Mill behind Goodman’s Farm Supply.

“I think it will do really well in this area,” predicted Jenkins, whose mother, Janice, served as chairman of Farmers Day for 25 years.

Judy Keever of Charlotte, and her 95-year-old mother, Frances Martin, found a nice resting spot outside of Mala’s Thai Cafe, which like many businesses along Main Street was open during Farmers Day.

Mala Martin, Frances’ daughter-in-law, planned to serve hot dogs and hamburgers in addition to her regular menu Saturday, because Farmers Day is that kind of festival.

Charles Johnson and Robbie Pickrel stopped for a rest not far from the stage on South Main Street.

“I bet the No. 1 complaint this year will be not having bleachers down there,” Johnson said.

But from what Johnson could otherwise tell, folks seemed to have smiles on their faces Saturday.

“Everybody I see seems to be having a good time,” he said.

It was a red boots, red balloon kind of day.