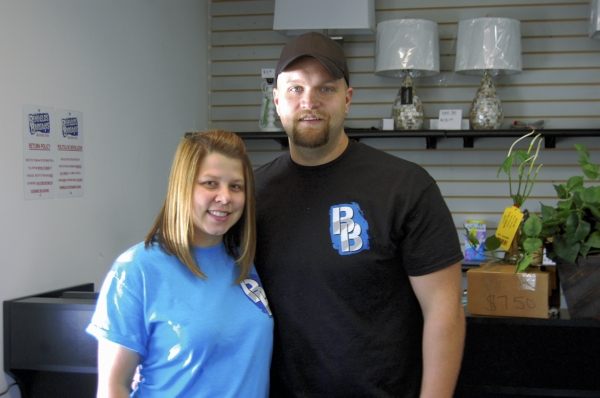 Amanda Raymond/Salisbury Post Keith and Melissa Benfield held the grand opening for Benfield's Bargains on July 5. The store at 2370 S. US Highway 29, offers products at 50 percent off what larger retailers sell them for.

Keith Benfield, along with wife Melissa, hosted the grand opening for his store Benfield’s Bargains Discount Store on July 5. The store is located at 2370 S. U.S. Highway 29 in the Landis Commons shopping center.

Benfield said he decided to open his own store to start saving money to send his twins, now 22 months old, to college.

He has managed different business in the past, most of them being restaurants.

“We’ve always wanted to be entrepreneurs,” he said about himself and his wife.

Benfield buys overstock and liquidation items in bulk from different stores and offers them for up to 50 percent off of what larger retailers might sell them for.

With the products changing from week to week, the store is like an indoor yard sale.

“You never know what we’ll have when you come,” Benfield said.

On Friday there were books, table cloths and blinds on the store’s “catch-all” tables, and luggage, picture frames, toys and lamps on shelves around the walls.

Along with the low prices, the store will have a senior day every Wednesday during which senior citizens will receive 10 percent off.

Benfield said he wanted to offer something to the Landis area for people of middle to low income.

“There’s really no store in the area like it,” he said.

He said if he sells the products for low prices and can still make a profit, it’s a win-win.

“We’re not trying to kill anybody’s wallet,” he said. “We’re just trying to offer a product that (the customer) is after.”

The store is open from 10 a.m. to 7 p.m. from Monday through Saturday and closed on Sundays.