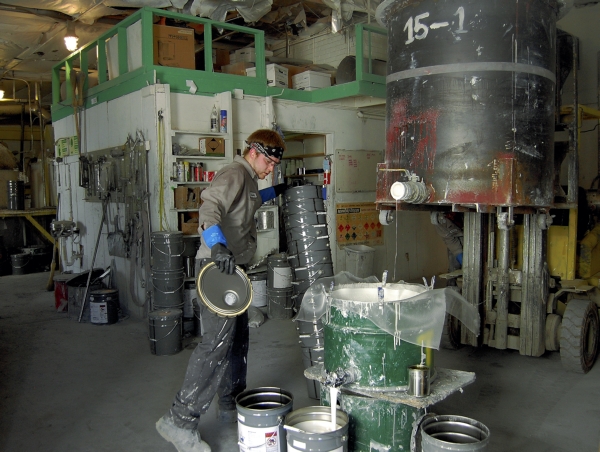 KANNAPOLIS — A Kannapolis-based, family-owned business will soon be moving its headquarters to Salisbury.

Aldo Products Co., Inc., now at 1604 N. Main St. in Kannapolis, will be moving to a vacant building at 1320 Litton Drive in the Whitney Industrial Park.

“This is an exciting time for Aldo, and we are appreciative of all our partners,” Robert Brenk, president of the company, said in a press release. “We have grown our business dramatically over the past few years, and this new facility is a key component of our plans to continue to build our roof coatings business and to always meet the needs of our customers.”

The sustainable roof coatings save companies money because it does not interrupt business. The coatings also reflect UV rays and save energy costs.

Brenk’s father-in-law Willie Kramer started the company in the 1980s in the Midwest. A chemist by trade, Kramer’s company offered roof coatings and adhesives.

One of Kramer’s main customers was a furniture company here in North Carolina, and the state made an impression on Kramer. Tired of harsh winters, Kramer and his wife moved the company to Kannapolis in 1985.

Brenk became involved in the company as a general manager in January of 1998. He and his wife lived in California prior to him taking the job at Aldo and moved to South Carolina so that his wife could be closer to her mother. His wife has no brothers, so Kramer looked to Brenk to take over the business.

Other silent investors and partners were eventually bought out and in October of 2014, Aldo became 100 percent family-owned.

“We are very much a family business,” Brenk said.

Since the furniture industry left the area, the company narrowed its product line to only roof coatings, primers and sealants.

The company is more of a compounder and blender than a manufacturer. Brenk said he tried to model his business as a Just-In-Time blending operation, which basically means there is not a lot of inventory of already made products. The products are made once ordered by customers.

Brenk said the company is in the middle of a growth period.

“We have doubled the business in the last three years,” he said.

They added four employees in July, making the employee count 17, and have revenues approaching $10 million a year.

Brenk said the company actually outgrew its current space three years ago. They have been using outside storage on and off the property.

“It’s going to give us significantly more room,” Brenk said.

The current facility is in Rowan County and Brenk said he wanted to stay in the county if he could.

The Rowan County government applied for a Building Reuse Program grant to help fund the renovations for the building, and the N.C. Rural Infrastructure Authority awarded $180,935 in June.

Along with a great product, Brenk said he tries to develop a work culture that is different from corporate work cultures.

He works hard to show his employees that he is a boss that truly cares and has a vested interest in their lives. He even encourages his employees to set professional and personal goals for themselves.

Brenk said because it is a relatively small business, employees have the opportunity to do more than they were originally hired for. And positions can evolve and change as time goes on.

Denise Colton has been general manager at Aldo Products since 2012 and was actually a customer before she was an employee.

She said all of the employees work as a team under Brenk’s encouragement.

“Aldo, for me and others, seems to be a fair employer and they really seem to care about their employees,” she said.

Tina Burton, who has worked in administration and customer service for three years, said the company is family-oriented.

“We do a lot of business with a tight-knit group of people,” she said.

Both Colton and Burton said they were excited about the move.

“Everyone is looking forward to the larger space and the room to grow,” Burton said.

Brenk said he knows not all of his employees plan to retire at his company, but he hopes they will be able to look back when they are gone and be grateful that they worked at Aldo Products.

“That’s what drives me. It’s not all about the money,” he said.

The new facility is expected to be operational by the end of this year.

New chief to be sworn in Monday

By Amanda Raymond amanda.raymond@salisburypost.com SALISBURY — The mayor and city council will host an Oath of Office ceremony and reception... read more