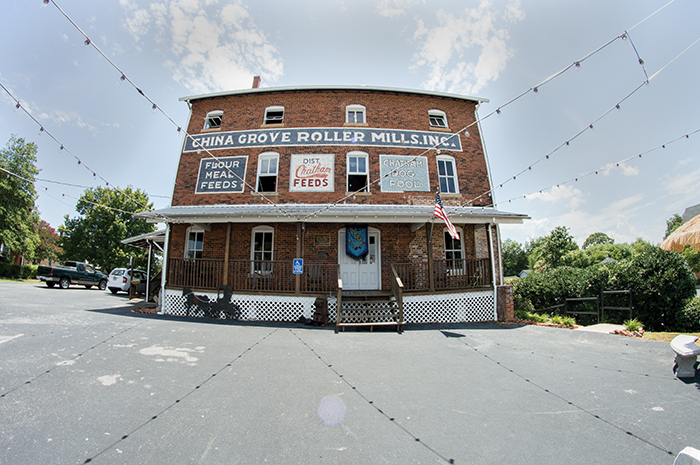 Josh Bergeron / Salisbury Post - The China Grove Roller Mill will be given to Rowan Museum Inc. as part of an agreement that was unanimously approved by the mill's board this week. The Southern Rowan Historical Society will also cease to exist.

CHINA GROVE — An era of ownership will come to a close later this year, when the Historical Society of South Rowan disbands and donates its historic roller mill to Rowan Museum Inc.

Since 1996, the historical society has operated the China Grove Roller Mill as a museum. It is the only standing roller mill in Rowan County. The mill, which ran for 100 years, could grind 400 pounds of flour every 28 minutes in its heydey. Located on North Main Street in China Grove, the roller mill was placed on the National Register of Historic Places by the U.S. Department of the Interior on Dec. 29, 1933.

After months of consideration, the Historical Society of South Rowan on Monday unanimously voted to dissolve and transfer its assets to Salisbury-based Rowan Museum Inc. The focal point of the transfer, scheduled to take place on Nov. 1, is the roller mill.

The historical society will also give Rowan Museum more than $10,000 in savings. Historical Society Chairwoman Barbara Doby will sit on the Rowan Museum board seat. The annual China Grove Tour of Homes will no longer occur, Doby said.

“It’s time for a new birth,” Doby said on Friday. “You have to age out before you age yourself out … We just felt this was right.”

The Rowan Museum board approved the transaction earlier this month.

“Everybody is really excited about it,” Rowan Museum Director Aaron Kepley said.

Kepley stressed the transaction will not affect the way the 1903 roller mill is still used for local events in China Grove, but Rowan Museum hopes it will make the roller mill a more visible historic property throughout the county and surrounding region. Rowan Museum board members also like that the roller mill opens up new interpretive possibilities — the 1900s — for its educational programming. The Rowan Museum’s other properties predate the Civil War.

Another exciting aspect for Rowan Museum is that the Historical Society of South Rowan has more than 100 members, and of those only three also are members of the Rowan Museum. Kepley said he hopes some of the historical society members will join Rowan Museum’s board. Doby confirmed that a number of members plan to join the board.

She said Rowan Museum Inc. has more resources at its disposal. As a result, the roller mill will benefit, she said.

Despite the transfer, visitors to the roller mill should still expect to see Doby at the roller mill. Just before an interview with the Salisbury Post on Friday, she was pulling weeds in a flower bed located in front the building. Doby joked that she will still be sweeping, pulling weeds and performing other tasks at the mill.

“I’m going to retire because my time and season is up,” Doby recalled telling the board.

She said others on the board said they also wanted to retire. Shortly after, Doby said the historical society began discussing the Rowan Museum transfer. Kepley said Rowan Museum and the Historical Society of South Rowan had been in negotiations about this deal since May.

Doby said Rowan Museum will receive “a building with no faults.” The four-story structure, including a basement, has all of its original chutes, elevators and machinery. The main walls of the structure are 22 inches thick, and its bricks were made locally from the mud of Grants Creek.

The mill received a $450,000 renovation in 2005. Improvements have given the building a meeting room, kitchen, restrooms, display areas and a souvenir shop.

Rowan Museum already owns and/or operates historic properties that include the 1854 Courthouse in Salisbury, where it is headquartered;  the Old Stone House in Granite Quarry; and the Utzman-Chambers House on South Jackson Street in Salisbury.

It also will have a museum development center in a former store location at the West End Plaza. It will be a place where the museum can develop exhibits and programming for its properties, while having some artifacts on display, too.