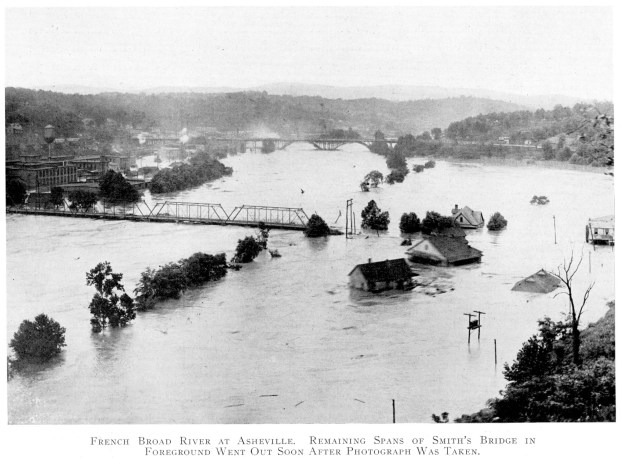 The flood of 2016 took out numerous railroad bridges, including here on the French Broad River.

The Flood of 1916: Hundredth anniversary

July 16 marks the hundredth anniversary of the Flood of 1916, the largest flood in North Carolina’s history.

The flood killed an estimated 80 people and reeked havoc across Western North Carolina and its railroads.

What made the flood so monumental was two tropical storms that came up along the coast of the Carolinas. The first hurricane came from the Gulf Coast and hit Mobile, Ala., on the morning of July 5 with 45 mph winds, which reached a peak of 107 mph by the end of the day. The rain didn’t stop in Alabama until July 14. The next day, the storm reached the mountains of North Carolina.

Charles and Vanna Davidson were honeymooning at All Healing Springs near Taylorsville when the weather took a turn for the worst. Charles wrote to his mother, telling her that he had married and that they were enjoying their honeymoon. The letter dates back to July 14, 1916, two days before the flood waters would reach their peak in North Carolina.

The letter is addressed to Charles’ father, Mr. A.A. Davidson, and reads as follows:

Yes, we’re married, and spending a few days at All Healing Springs near Taylorsville. Will likely be here until the last of next week.

Will be out to spend the day with you Sunday, 23rd. Banna said for you not to go to any trouble.

I am feeling fine and have gained a few pounds. Think this water is going to put me in good shape if I stay next week, and I think I will.

It is a nice, quiet place six miles from nowhere and right in the mountains. Will have to make this short so as to get it off today.

Will tell you more about it when I see you.

P.s. If you write send it in care of All Healing Springs, Taylorsville.

Charles and Vanna had no way of knowing their plans were about to be rearrangeed. On July 15 and 16, another hurricane went through Charleston, S.C., and made its way into North Carolina.

According to Rufus Honeycutt, the grandson of the Davidsons, the newlyweds got stuck at All Healing Springs because of the flood. He said it took the couple two weeks to reach Mt. Ulla by a horse-drawn carriage.

Ann Honeycutt, the daughter of Charles and Banna, said she remembers hearing the story of her parents’ honeymoon as a child. She said she couldn’t remember too much about the letter, which her son now keeps, or what her parents had told her about their experience.

“I do remember hearing about the flood on the Catawba River.”

Rufus said his grandmother, Banna, died before he was born, but that he did know his grandfather. He said he remembers him as a tall, thin man around 5-foot-8.

According to “The Floods of 1916: How The Southern Railway Organization Met An Emergency,” a book published a year after the flood, the line between Salisbury and Asheville was most affected on July 16, 1916.

“The first report indicating the extent of damage and furnishing a key to the quantity and class of materials that would be required was received the evening of July 16th.”

The July 1916 flood resulted in a roughly estimated $22 million in property damage. The Southern Railway Company dealt with a loss of profits estimated $1,250,000 for July alone. The flood put a total of 826 miles of Southern Railway out of service throughout the Carolinas and Tennessee.

Salisbury played a role in the recovery by receiving shipments of materials on July 18 and 19.

“The Floods of 1916” also includes an excerpt of an article published by the Salisbury Post on Aug. 18, 1916, praising the Southern Railway Company for working so quickly to restore the western line of tracks.

Although fewer and fewer survivors of the flood are around today, the Flood of July 1916 still holds the record as the largest for North Carolina and is remembered by the descendants of the flood survivors.

Allana Ansbro is a senior at the University of North Carolina-Asheville and has been an summer intern at the Salisbury Post.

‘Candles in the darkness:’ prayer vigil kindles hope in the wake of violence

By Rebecca Rider rebecca.rider@salisburypost.com SALISBURY — It was a small and dedicated group that gathered at Hood Seminary’s Aymer Center... read more