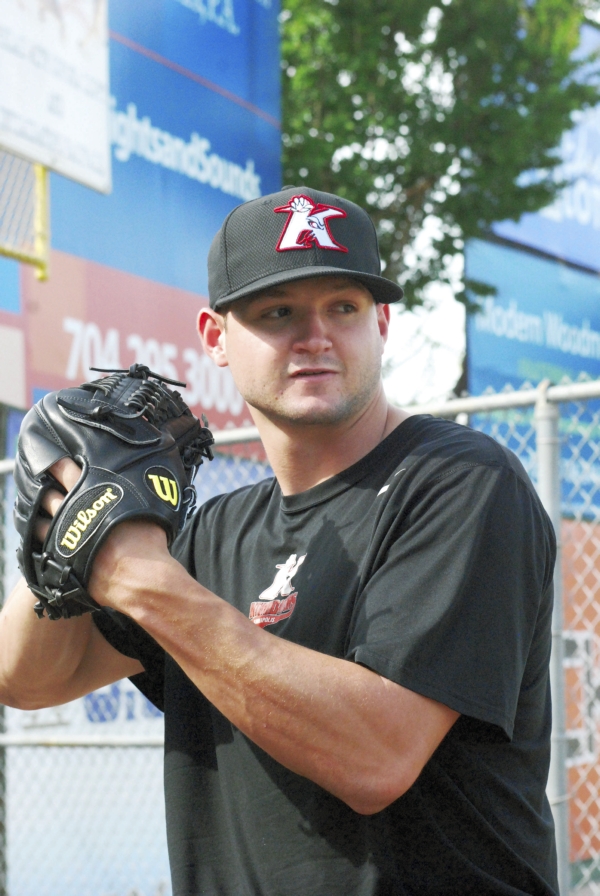 The recently signed relief pitcher for the Kannapolis Intimidators has spent the past month-and-a-half helping Coastal Carolina win the Big South Conference title and its first College World Series, then making his professional debut. In between he was drafted and signed by the Chicago White Sox organization, experienced all the rapture of being a world champion and the letdown that comes with separating from friends and teammates.

“It’s been quite a whirlwind,” the 22-year old right-hander said before a mid-week game at Intimidators Stadium on Thursday. “Back on Memorial Day, we had just won that conference championship, and I’d never won anything in my four years there. That was the goal, but by then we knew we had a team that could do something special.”

Coastal (55-18) qualified for the collegiate post-season tournament and stutter-stepped through the playoffs, winning 11 of 14 contests — including five elimination games.

“It was like that the whole season,” said Morrison, a 27th-round pick from the Columbia suburb of Gilbert, S.C. “It was kind of our calling card. There was never any panic in any of us. I remember in the first elimination game (June 23 against Texas Tech), we were down 4-1 in like the third inning. With our season on the line, nobody panicked and we put up a four-spot and moved on.”

In the best-of-three championship series against favored Arizona, Coastal suffered a 3-0 opening-game loss at Omaha’s Ameritrade Park. “Didn’t really phase us,” Morrison said. “The next day we did something that brought us luck all season. We all wore basketball jerseys on the bus ride to the field. I was wearing Kobe. Another guy had Iverson. I think we were like 16-0 when we did that.”

It worked again in Game 2, when head coach Gary Gilmore tabbed Morrison to make his only start of the season.

“I had the freshest arm,” he said. “And I actually matched up well against (Arizona). They were a swing-and-a-miss type of team. They liked to chase breaking balls, so I threw a lot of curves and got the slider working well.”

Although Morrison wasn’t credited with a decision in the 5-4, series-squaring win, his fingerprints were all over it. He yawned in the face of adversity and saved the day with a command performance — allowing just two runs and striking out 10 in 6 2/3 innings. With the score tied 2-2, CCU pitching coach Drew Thomas went to the mound and removed Morrison, triggering an ear-splitting standing ovation.

“There were 25,000 people on their feet,” Morrison said. “I was crying on the mound. I have a picture of me tipping my cap to those people that’ll hang in my house for the rest of my life. (Thomas) was going to let me finish that inning, and when he came out I said, ‘Oh, c’mon Coach.’ He said, ‘I know you can get this guy, but you deserve this ovation you’re about to get.'”

A day later Coastal scored four unearned runs in the sixth inning and held on for a series-clinching 4-3 victory, setting off a celebration of Mardi Gras proportions. Nearly 6,000 fans awaited the Chanticleers upon their midnight arrival at Myrtle Beach International. A July 4th parade followed, with spectators aligned five and six deep, not far from campus. “I didn’t know there were that many people in Conway,” Morrison mused. “It’s a bigger deal than you realize when it’s actually happening.”

And then, just like that, the music stopped for Morrison. He finished the season 8-1 with 11 saves, a 1.50 ERA and 94 strikeouts in 72 innings. Not bad for a bullpen rock with just a pedestrian, 89-91 mph fastball.

Drafted on June 11, he signed with the White Sox on July 7 and made his profession debut last Friday in Greensboro, where he allowed two unearned runs and an Isael Soto home run in an inning’s work.

“I’m known as a guy whose pitches have movement,” he said. “Just not that day. I think I was trying to throw it too hard, but that (home run) pitch wasn’t getting anybody out. It was 2-and-2, I should have thrown a breaking ball. That’s another adjustment I’m making — you call your own pitches here. Someone told me if you’re going to go down, you should do it with your best pitch. I learned that right away.”

His second appearance went a little better. Against Lexington on Wednesday, Morrison wriggled out of a two-on-and-two-out jam and fanned two in his home debut. Intimidators’ pitching coach Brian Drahman — a former major-league fireman for the White Sox and Marlins — is withholding an assessment.

“Give me about 5-10 outings,” he said. “Then we’ll know more about him and his makeup. My mentality was always to go get them — attack, attack, attack. It’s only two outings, but (Morrison) can be that guy.”

Morrison — at 6-foot-1 and 195 pounds — may or may not fit that mold. But he’s quick to mention how the winds of fate can fluctuate.

“Hey, I was a walk-on when I showed up at Coastal four years ago,” he said. “And maybe if there are players out there, reading this in the paper, who should know it’s not about getting scholarship money. It’s about getting a chance to play and learning as you go. Do that and you never know what can happen.”