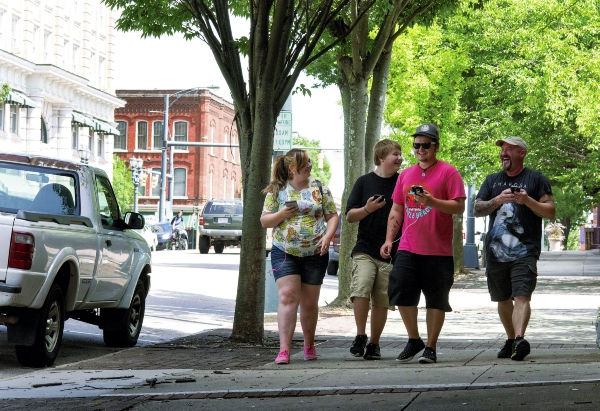 SALISBURY — A smartphone game that’s rocketed into the top tier of cultural prominence has brought crowds of teens and adults to downtown Salisbury.

Locals who play the game say they enjoy its requirement that players travel to different areas to collect items and battle others. Called “Pokémon Go,” it also draws on nostalgia from popular games by the same name that were first released in the 1990s. It has surpassed other popular applications, including Twitter, in daily users.

Joe Forrester, a 29-year-old player, said he downloaded Pokémon Go because he played one of the very first games by a similar name.

Lexington resident Jordan Worley, who traveled with friends and family to Salisbury to play the game, noted the requirement to travel around.

“I like it because it makes you social when you ordinarily might be sitting on the couch,” Worley said. “You get out and get to explore.”

As part of the game, players use a smartphone to locate PokéStops, which allow users to collect items. Players can also battle others at sites that have been labeled Pokémon gyms. Common sites for PokéStops and gyms include churches, public art, water towers and other landmarks. It’s a free game, but allows players to spend money in order to progress more quickly.

One goal of the game is to catch as many monsters — called Pokémon — as possible and raise them to high levels. Players can also take over gyms based on the team he or she chooses near the start of the game, which uses smartphone cameras to display the monsters on the screen as if they were in the real world.

Populated areas, such as downtown Salisbury, attract people because of the amount of landmarks. The corner of West Fisher and South Church streets, for example, is a popular location in the game because multiple PokéStops are located within a short distance.

Parents play the game. Young adults play it. Teens play it. Children play it. Everyone, including police officers play it, said Amethyst Eccles, who was walking through downtown Salisbury and playing the game with friends.

Eccles told a story about an incident that happened a few days ago, where she suspected a police officer was playing the game.

“I was riding through by myself, there was a gym, I was trying to take it over and a cop came up behind me,” she said. “I’m (team) blue. The gym was (team) yellow and then it turned red. The only person there was the cop. So I was laughing about it because nobody else was there and I know I didn’t turn it red.”

Some “Pokémon Go” players who spoke to the Salisbury Post said they never expected a smartphone game to draw crowds of teenagers and young adults out en masse.

Despite its popularity, the game has caused some concern among its players about others actions. The app’s load screen reminds players to “be alert at all times” and to “stay aware of your surroundings.” Some, however, say they’ve seen others playing “Pokémon Go” and driving — an action that those who play the game unanimously condemn.

Police say pedestrians can also be a problem.

“The problem that we do see is that people are looking down at their phone and . . . they’ll walk into traffic, because they’re not paying attention to anything around them,” police spokeswoman Shelia Lingle said.

Lingle said there have been national reports of people setting “lures” – items that attract Pokémon to a certain spot – to draw players with the intent of doing “some type of harm.”

“Be aware of your surroundings. Know where you are and what areas you’re going into,” Lingle said.

The game can also draw out players late at night, and Lingle said anyone out late should avoid alleyways and unfamiliar areas.

A curfew for minors was instated in 2009, and is still in effect, Lingle said. Anyone under the age of 16 is not permitted to be out without a parent or guardian between 11 p.m. and 6 a.m. Monday through Thursday, or between 12 a.m. and 6 a.m. Friday and Saturday unless they are going to and from school, work, church a civic event or traveling in the event of an emergency. Parents will receive a citation if their child breaks curfew.

And of course, be sure not to play and drive.

“Enjoy it, but be careful,” Lingle said.

The Rowan County Sheriff’s Office also recommended that people go out in pairs or groups, and reminded players not to trespass or “or go to areas you usually would not if you weren’t playing Pokémon Go.”

Another questionable aspect of the game is the locations where PokéStops or gyms are located. For example, some are in cemeteries. Others are on private property.

Salisbury resident Beth Dixon’s house — the historic Fulton-Mock-Blackmer house on South Fulton Street — is a Pokestop. Dixon said she has noticed the increased foot traffic but doesn’t mind it.

It struck her as funny, she said. The Blackmer house is featured in the game as a PokéStop.

“I can’t really tell you what that means,” she said, laughing.

She said none of the players have trespassed or been rude.

It’s unclear whether the game is a fad or here to stay, but Whitney Nelson said she thinks the game will remain a hit as long as its creators continue to update it with new features.

“I think it’s exciting, different and has a positive benefit that is exercise and walking around to different spots,” Neslon said. “If it stays interesting, I think it will be popular.”

Rowan Museum to take over ownership of historic China…