I-85 interchange with roundabouts proposed in China Grove 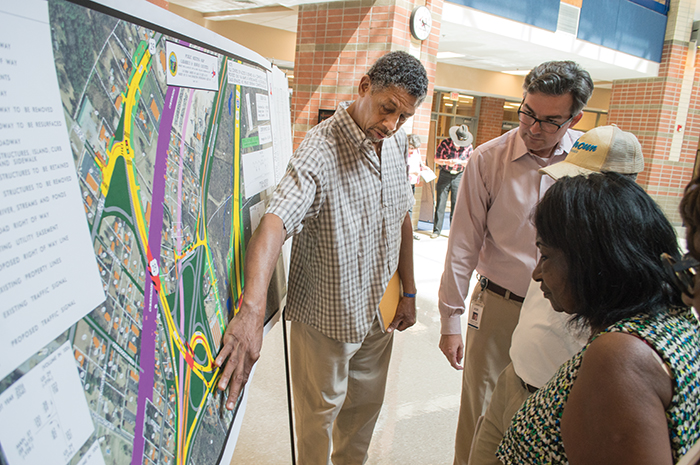 Josh Bergeron / Salisbury Post - Southern Rowan residents and an engineer look over maps for a redesigned I-85 interchange in China Grove. The work is scheduled to occur in conjunction with the interstate widening.

The N.C. Department of Transportation held a public meeting Thursday to display plans for a full Interstate 85 interchange at N.C. 152. The interchange would use roundabouts to direct traffic instead of traffic lights.

Currently, China Grove has two, partial interstate interchanges. The current exit at N.C. 152, for example, only allows a motorist to enter the southbound lanes of I-85. At the same spot, motorists are only allowed to exit I-85 if they are traveling in the northbound lanes. The opposite is true at a spot located use to the north, at an interchange with U.S. 29.

The plan presented Thursday would close the partial interchange at U.S. 29 and turn the area into an access road between N.C. 152 and Mount Hope Church Road.

At the full interchange with N.C. 152, two roundabouts would allow motorists to exit or enter I-85. Johnathan Henderson, a designer of the plans presented Thursday, said roundabouts were chosen because of how they’ll affect traffic flow and improve safety.

“It’s going to be different but, once people get used it, it will be better than a stoplight and safer,” Henderson said.

Construction on the interchange won’t occur until 2018, said Henderson and engineer Will Moody. Both work for HDR engineering, which has been hired for the I-85 widening project.

“This design is much better than stoplights,” Ivey said.

A number of meeting attendees said they liked the plans.

Daniel B. Alexander, who lives in the area where construction would occur, said the plans made sense for motorists. Roundabouts seem like the best solution, Alexander said.

“I’m fine with the project as long as they don’t tell me we have to move,” he said.

Sandra Esquivel, who lives just off of N.C. 152, said the full interchange would likely create more traffic on an already busy road. Esquivel lives to the east of the proposed interchange site and said the creation of Carson High School has already led to increased traffic. She has lived in the same area for more than 20 years.

“When you want to go somewhere, you don’t want to fight traffic right from your door,” Esquivel said.

All of the plans presented Thursday will occur as part of I-85’s widening, which is underway in Cabarrus County.

State Rep. Carl Ford, R-76, said he’s happy to see the widening finally occurring after years of talk. Ford lives near the proposed interchange, but says he won’t be affected by construction work.

Local residents who were unable to attend the public hearing on Thursday can still submit public comments until July 28. Comments or requests for information can be sent to Kelly Seitz or Chris Corriher, DOT engineers in Rowan County. Seitz’s email address is kseitz@ncdot.gov and his office phone number is 704-630-3220. Corriher’s email address is ccorriher@ncdot.gov and his office phone number is 704-630-3200. A copy of the maps shown Thursday can also be viewed at www.ncdot.gov/projects/publicmeetings/.

Other significant parts of the project near the interchange include: a slightly steeper and flatter bridge on U.S. 29 over railroad tracks and various land acquisition around road construction.