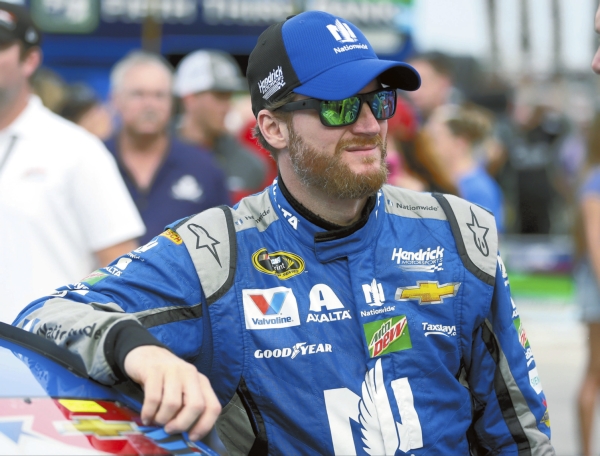 LOUDON, N.H. (AP) — Dale Earnhardt Jr. has dropped out of the Sprint Cup race Sunday at New Hampshire Motor Speedway because of symptoms of a concussion.

Earnhardt was evaluated in Charlotte, North Carolina, this week and doctors did not clear him to race. Hendrick Motorsports said Thursday it had no timetable for his return.

Alex Bowman will drive in his place.

NASCAR’s most popular driver, Earnhardt was involved in a 22-car wreck in Daytona this month and also wrecked last month at Michigan International Speedway. He says he was feeling fine last week and thought the problem was allergies. When that didn’t help, he met with a neurologist.

Earlier this year, Earnhardt pledged his brain to researchers looking into the connection between concussions and traumatic brain injuries.

“I’m looking forward to treatment with the goal of getting back in the race car when the doctors say I’m ready,” Earnhardt said.

Earnhardt Jr. at least twice in his career hid concussion symptoms to avoid being removed from his car. In 2012, he sought medical attention several days after a crash at Talladega because of symptoms he knew were concussion-related. During that examination, it was determined he’d suffered two concussions in six weeks and was sidelined for two weeks of healing.

NASCAR required the next year for drivers to submit a baseline neurocognitive assessment. When a driver in NASCAR can’t return his damaged car to the garage, a trip to the care center is required, and under a new three-step process, if a driver shows any indication of a head injury they go immediately to a hospital. Concussed drivers must be cleared by a neurologist or neurosurgeon before they can get back in a race car.

The 41-year-old Earnhardt is winless this season and 13th in the points standings. Because he will not start every race, Earnhardt will need a waiver from NASCAR to compete in the Chase for the Sprint Cup championship, if he’s meets other eligibility requirements.

Hendrick Motorsports will provide an update next week on Earnhardt’s status for the July 24 race at Indianapolis Motor Speedway.

“I’m proud of Dale for standing up,” team owner Rick Hendrick said. “The number-one priority is his health, so we’re going to give him all the time he needs. We completely support the decision by the doctors and will be ready to go win races when he’s 100 percent. In the meantime, we have full confidence in Greg (Ives) and the team, and we know they’ll do a great job.”

The 23-year-old Bowman has not raced in the Cup series this season and had no top-10 finishes in 71 starts over the 2014-2015 seasons. He drives part-time in the second-tier Xfinity Series for Earnhardt’s JR Motorsports team.

Staff report ASHEBORO — Rowan County poured eight runs across the plate in the second inning and went on to... read more