‘Candles in the darkness:’ prayer vigil kindles hope in the wake of violence 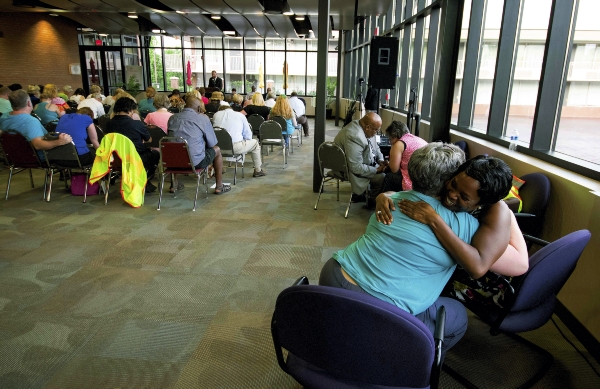 JON C. LAKEY / SALISBURY POST GeoRene Jones and Linda McElroy hug each other after joining hands in prayer. Hood Theological Seminary hosted a prayer service for the community Thursday evening in the wake of the recent national shooting tragedies that have involved law enforcement.

SALISBURY — It was a small and dedicated group that gathered at Hood Seminary’s Aymer Center Thursday evening to pray. Dr. Vergel Lattimore, president of the seminary, said in an announcement of the event that he was inspired to hold a prayer vigil after the tragic deaths of Alton Sterling, Philando Castile and five Dallas police officers last week.

“Prayer to me is an active thing that we do,” he said in his opening comments Thursday.

He wanted Hood to “be a place that we light candles in the darkness.”

The vigil was a time for local pastors and ministers, public servants and members of the public to gather together to grieve, seek comfort in prayer and ask for spiritual guidance and peace for those who lost loved ones in last week’s string of shootings. As various faith leaders from the community spoke and led prayer, they touched on different facets of the problems that plagued the country: a history of pain and mistrust, an unwillingness to listen, broken promises and vengeance.

“Right now, it seems like we’re living in a time of fear and a time of anger, and instead of listening to one another, we keep raising our voices,” Carol Hallman, pastor at First United Church of Christ, said.

Hallman referenced the Dallas shootings, as well as the deaths of 49 members of the LGBT community in an Orlando nightclub in June. After a time, she said, she — and others — grew tired of violence, hate and fear.

But Hallman, and those who bowed their heads Thursday took comfort in the fact that God was there to guide, to provide wisdom and to heal.

“But as people of faith, we do not ultimately despair at the futility of human beings to be unable to do what is right . . . we do not give into our feelings of mistrust and bitterness at gross injustices, because at the end of the day, we believe in a God who is able to overcome what we cannot,” Andre Resner, Hood professor of homiletics and worship, said.

To move forward from tragedy, it was important to acknowledge the past, to listen, and to “unpack the baggage” in order to move towards the future.

“We have a history,” Resner said.” But tonight, let us resolve to have a future.”

Ministers asked God to remind each person to listen, to forgive others and be merciful, and to be willing to stand together to forge ahead. The small gathering had an intimate air as people called “Amen!” from their seats, or as prayer leaders invited them to pray in groups for a path forward for the community.

“We need harmony, we need unity,” Russell Smyre, pastor at the Father’s House of Glory, said.

Smyer said that the violence of last week was a problem that couldn’t be “cookie cut” and several other speakers cautioned against assigning blame, and encouraged those present to listen to everyone they came across and to see them as unique human beings.

“Remind us again that we are each . . . beautifully and wonderfully made in your own image,” Hallman said during her prayer.

During each prayer, faith leaders implored the community, and the church, to band together and to fight injustice with peace, unity and a sense of belonging. Salisbury Mayor Karen Alexander spoke briefly at the end of the service. Alexander began to cry as she said that if the group could call on God together, they could lead Salisbury “as a city and as a community towards peace.”

“I would like to ask all of you to join me to that end,” she said, “because I believe we can together.”

And as each speaker reminded the flock, with God, all things are possible.

Last week’s tragic events have also inspired a peace and unity march which will occur Saturday. The march will begin at 12:30 p.m. at the Big Lots parking lot at Martin Luther King Jr. Avenue and East Innes Street and then walk down Innes Street to Park Sterling Bank, 401 W. Innes St. The Salisbury Police Department will provide a police escort.