Ugly pastries to get new packaging 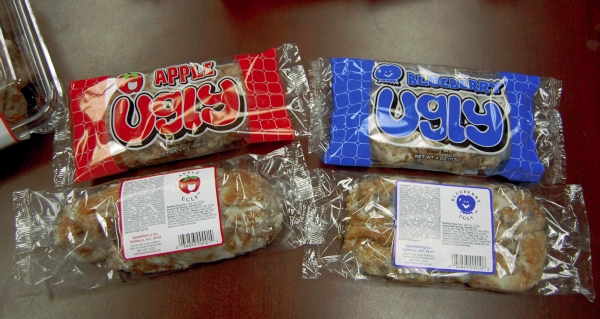 Ugly pastries from Apple Baking Co. will soon be available in new packaging. Plant manager Krystal Dill said the current packaging, seen at the bottom of the picture, wanted to play up the homemade quality of the pastries, but the new packaging will hopefully be more attention-grabbing with its bolder colors and bigger print. Amanda Raymond/Salisbury Post

SALISBURY — Ugly pastries are getting a new look.

Though the pastry itself is staying true to its ugly nature, Uglies from Apple Baking Co., at 380 Apple Road in Salisbury, will soon come in a new packaging.

The current wrapping is clear plastic with a label in the middle that has a list of ingredients and nutritional facts printed on it, along with the name of the product and the logo.

The new look is a printed film wrap with bright bars of color bordering the Ugly name in big bubble letters, also in color. The colors correspond to the flavor of the Ugly, like red for apple Uglies and blue for blueberry Uglies.

“They wanted it to have a very homemade look,” she said.

Now, Dill said, the new look will help the company modernize the product and help it compete with other pastry brands.

Dill said the company took a hit when in 2012 former president David Bates was charged with embezzlement.

After that, current president Robert Watts took over. Dill said new staff was brought in, including herself, and they went through extensive training. The company even gained its food safety certification through the American Institute of Baking International.

The company was able to work its way out of debt and invest money back into its products. The new packaging is a reflection of how far the company has come and where it wants to go in the future.

“There’s so much more artwork that you can do with printed film than with labels,” Dill said.

Watts said the new packaging is just the first phase of the company’s brand enhancement initiative.

He said there will also be changes to the exterior box that the Uglies come in and they will also be available in smaller sizes to cater to children. Instead of 4 ounces of the glazed cooked dough, customers would be able to buy a 2-ounce multipack.

What will those smaller pastries be called? Ugly Babies.

Customers should expect to see the new packaging for all flavors — apple, blueberry, chocolate chip, raspberry and raisin honey — in about a month.

They are even working on new flavors like maple bacon for the fall season.

Watts said the rebranding process has taken about a year.

Dill said the company is at a place where it is no longer just surviving but can now begin to thrive.

“We’ve taken all this hard work and turned it into a chance to compete with the other major companies in the industry,” she said.

Uglies are available nationally, and Watts said the new packaging will make the pastries more shelf-friendly.

“We have a wonderful following …” he said. “We hope to grow that following.”