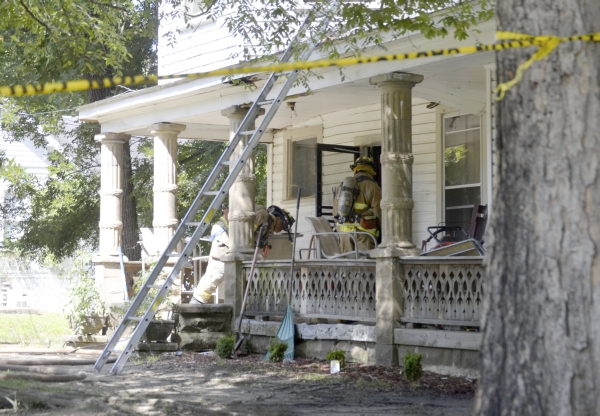 Firefighters responded Thursday to a kitchen fire that appeared to begin in the ceiling. No cause was immediately determined. Shavonne Walker/Salisbury Post Firefighters responded Thursday to a kitchen fire that appeared to begin in the ceiling. The homeowner saw smoke and called for help at the North Main Street home. A firefighter was treated at the scene for heat exhaustion. No cause was immediately determined. Shavonne Walker/Salisbury Post

SALISBURY — A fire discovered in the ceiling of a kitchen at a North Main Street home is under investigation Thursday, fire officials said.

Firefighters were called to the home, 1008 North Main St., at the corner of West Miller Street, around 10:30 a.m. for smoke inside the residence. When firefighters arrived, they saw a smoldering fire in the ceiling, said City Fire Marshal Terry Smith.

The fire was contained to the ceiling, Smith said.

The fire was under control in less than 10 minutes. The homeowner was not cooking at the time, and it’s not clear what caused the fire, he said.

Smith said there was minimal damage to the kitchen. In addition to multiple Salisbury City fire personnel, members of the Franklin Fire Department also responded.

At some point, a firefighter was treated at the scene for heat exhaustion, but it did not require that he be taken to the hospital. Salisbury Police blocked off traffic within a block of the scene including where North Main and West Steele streets.

By Josh Bergeron josh.bergeron@salisburypost.com SALISBURY — U.S. Rep. Richard Hudson is doubling down on his attempt to delay flights to Cuba... read more