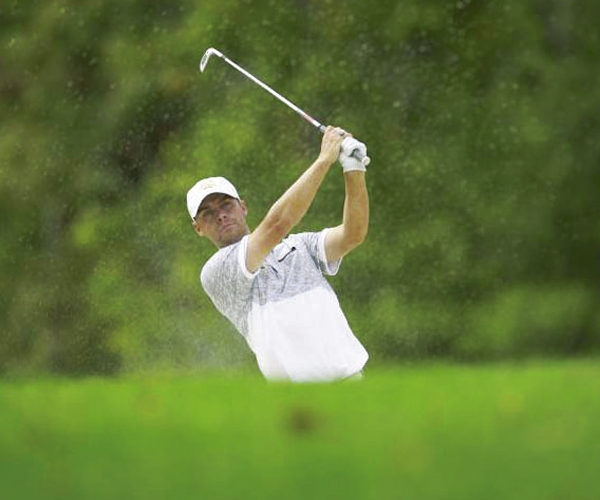 Eric Edwards is certain he played the best round of golf of his life last Saturday.
A 2014 Salisbury High graduate and a rising junior at George Mason University, Edwards shot 7-under 137 (72-65) to qualify for the U.S. Amateur. He fired that second-round 65 under come-from-behind pressure and executed that scorching score on the challenging Lake Course at Carolina Trace in Sanford.
Edwards made eight birdies on his way to the 65. Five birdies came in a flurry on the back side, where he carded a scalding 31.
“Under the circumstances, the best round I’ve ever played, and, for sure, it does change things for me mentally,” Edwards said. “To know I can go that low in a big tournament, it’s a confidence-builder for every tournament in the future.”
Part of a 100-man field vying for three qualifying berths, Edwards played a practice round at Carolina Trace and was convinced scores would soar.
“It’s a very tough course, and I was thinking 2-under or 3-under for 36 holes would qualify,” Edwards said.
Edwards went out and shot even-par 72 in the first round, but his round was marred by a watery splash and a double bogey on No. 8. That 72 kept him in contention, but he trailed 11 golfers and he was deadlocked with several more.
“I knew I had to do something special in the second round,” Edwards said.
He did exactly that. A brisk start was critical, and he came flying out of the blocks. He birdied holes No. 2 and No. 3.
“I finally got off to a good start, which is something I’ve been struggling with,” Edwards said. “Those early birdies set the pace for a good round.”
In the second round, he avoided the water on No. 8, but he still bogeyed. It would be his only bogey of the round.
Edwards regained momentum by sinking a 30-foot birdie putt on No. 10. Then his putter stayed warm and he racked up consecutive birdies on 13, 14 and 15. By then, he knew he had a serious chance to qualify.
“Every putt was going in,” Edwards said. “Every 15-footer.”
Edwards had attacked all three par-5s and had birdied them all. He kept that perfect run going on the 553-yard, par-5 18th to close his round.
He was in some trouble on 18, but he lashed a 3-iron 250 yards, 12 feet from the pin, and cashed in the putt for his eighth birdie and the 65.
“I was at a distance that’s between clubs for me and I just decided to hit that 3-iron as far as I could,” Edwards said. “Normally, I don’t hit a 3-iron that far, but I must have had some adrenaline going.”
Edwards had the best score of the second round and placed second in the qualifier, two strokes behind medalist Alex Smalley, a rising sophomore at Duke. He finished a shot ahead of Doc Redman, an incoming freshman at Clemson. Redman won a playoff for third place.
“I shot a 63 (at Crescent) just playing with friends, and I shot a 64 in a tournament playing for George Mason,” Edwards said. “But those rounds didn’t compare with this one.”
Edwards didn’t come out of nowhere.
At Salisbury High, he was runner-up in the 2A state tournament as a senior and was the Salisbury Post’s Rowan County Golfer of the Year in 2011 and 2014.
He’s also been good at George Mason. He tied for third place this spring in the Atlantic 10 Championships with a 72-72-75 — 219 effort. A finance major who’s also succeeding in the classroom, he made the Atlantic 10’s All-Academic team.
“My freshman year there were some adjustments to make as far as time management, but my sophomore year was smoother,” Edwards said. “George Mason is the place that’s right for me. I know what I need to do to get better, and this is a place where I can get better.”
Edwards will head to the U.S. Amateur Championship at Oakland Hills Country Club in Bloomfield Hills, Mich., on Aug. 15-21. That tournament is 36 holes of stroke play, with the top 64 from a 312-man field advancing to match play. The U.S. Amateur is a tournament that has crowned Arnold Palmer, Jack Nicklaus, Phil Mickelson and Tiger Woods as champions, and it’s the United States Golf Association’s oldest championship.
Edwards has more challenges coming up before he heads to Michigan.
He’ll compete in the upcoming Carolinas Amateur in Charleston, S.C., on July 14-17, followed by an appearance in the Cardinal Amateur Tournament in Greensboro on July 21-24.
“Every day and every tournament is a stepping stone,” Edwards said. “There’s no easy way in golf and no one becomes good overnight. You just have to believe that if you keep working hard enough that good things will happen.”
Good things happened last Saturday.
The first local qualifier for the U.S. Amateur since former Salisbury High star Will Collins in 2011 and the first George Mason golfer to qualify since 2005, Edwards is 20 years old, but it’s a mature, veteran 20. He speaks like a 30-year-old C.E.O.
When Edwards was 16 he shot 136 for two rounds in Greenville, S.C., and qualified for the U.S. Junior Amateur held in New Hampshire. He remembers walking to the first tee with knees shaking. He shot 81.
“I was about as nervous as a person can be that day, but I’m a lot more experienced now and I’ll be a whole lot calmer,” Edwards said. “I plan to play my heart out.”

From Mustang to cactus kid: Peeler adjusting to Arizona,…