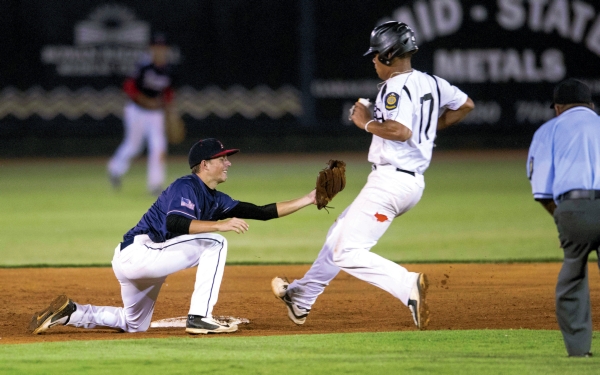 JON C. LAKEY / SALISBURY POST Rowan’s Dalton Lankford (19) puts his glove out to tag Randolph’s Jay Rorie at second base. Rorie had gotten picked off first base by Noah Gonzalez and attempted to get to second. Randolph won the game, 14-6.

SALISBURY — Rowan County beat an undefeated pitcher on Tuesday, but Randolph County returned the favor on Wednesday at Newman Park, knocking out Rowan lefty Brandon White in the third inning and romping, 14-6.
Randolph (25-10) stayed alive in the best-of-five Area III semifinal series. Trailing two games to one, Randolph hosts Rowan at McCary Park tonight. If needed, Game 5 will be played at Newman Park on Friday.
Rowan (26-9) had won eight games in a row and 16 of 17 before falling flat in front of a big crowd.
“We didn’t play well at all, certainly not well enough to beat a good team,” Rowan coach Jim Gantt said. “We made a lot of mistakes and mistakes are really magnified when you’re playing against a good team.”
White entered the game with a 6-0 record, but a pair of early homers by North Carolina A&T signee Jay Rorie made his outing a brief one. Rorie led off the second with a bomb, and his third-inning grand slam on a medium-heat fastball that stayed up around Rorie’s belt buckle proved to be the key blow of a long night. That shot put the visitors ahead, 5-0.
“I was seeing the ball well against the lefty and I was aggressive,” Rorie said. “We knew we couldn’t win three games all at once, so the motto was one at a time. We got this one and we’ll try to get another one tomorrow.”
White looked sharp in the first inning, zipping through the top of Randolph’s powerful lineup and recording two strikeouts.
“Brandon hit his spots and I was sure he was going to have another great game,” Rowan catcher Jake Pritchard said. “But those guys came to hit tonight. When they got up early we still believed we’d come back, but they just stayed on us.”
Lefty starter Ryan Webb pitched into the eighth inning for Randolph. That’s when he finally got tired. He exited after issuing three straight walks.
“Their starter was effective and we didn’t have at-bats as good as we needed to have,” Rowan first baseman Hunter Shepherd said. “I guess we were about due for a bad game, but you still never want to have one. Now we have to rebound from it.”
Randolph third baseman Jaxon Snider made a key defensive play in the bottom of the first. He made a whirling stab of a groundball off Juan Garcia’s bat and fired home to get a sliding Chandler Blackwelder at the plate. That highlight-film play kept Rowan from scoring first.
“Webb throws a lot of strikes, but we knew Rowan would put the ball in play, and we’d have to make the plays behind him,” Randolph coach Ronnie Pugh said. “Tonight we made a lot of nice defensive plays.”
Hits by Tanner File and Garcia helped Rowan get two runs back in the third. Those runs made it 5-2, but Rowan never got any closer.
Pritchard hit a solo homer in the fourth to get Rowan within 7-3.
Down 9-3 in the sixth, Brandon Walton and Pritchard got on base to start the inning, but Randolph shortstop Caleb Webster turned a hot grounder up the middle off Dalton Lankford’s bat into a rally-killing double play.
Randolph’s No. 9 hitter Clay Richardson caused a lot of Rowan’s pain with three hits and four runs scored. Rowan was also hurt by a flurry of walks, HBPs and wild pitches that gave Randolph a steady merry-go-round on the base paths.
Rowan used four relievers — Caleb Link, Brett Graham, Noah Gonzalez (briefly) and Hayden Setzer. Setzer pitched the final three innings.
“We didn’t get a very good start and our bullpen walked ’em and hit ’em and didn’t give us a chance to make plays defensively,” Gantt said. “When your pitchers aren’t getting the job done and your hitters aren’t grinding out at-bats, that’s a recipe for disaster.”
Rowan got three runs in the eighth to make it 10-6, but Randolph went right back to work and tacked on four in the ninth, as Cameron Morrison and Snider banged doubles.
“We swung the bats a lot better,” Pugh said. “We had a tough time against (Bryan) Ketchie on Tuesday. I don’t think we hit more than five balls hard.”
Rowan got two hits each from Pritchard and Seth Cauble, but the three guys who have been making the offense go — Blackwelder, Shepherd and Lee Poteat — were quiet. They were a combined 2-for-14 against Webb and reliever Caleb Hassell. Blackwelder was stopped after getting a hit to lead off the first, and Shepherd didn’t get a hit until the ninth.
Rowan is likely to send John Owen back to the mound tonight, with Sawyer Strickland the other possibility.
As the host team for the Southeast Regional, Randolph isn’t facing do-or-die pressure, but Pugh said that’s not really a factor for his team as far as trying to win the Area III championship.
“I haven’t heard any of our guys even mention the regional,” Pugh said. “They just enjoy playing with each other and they want to win every game that they can.”

By Mike London mike.london@salisburypost.com Eric Edwards is certain he played the best round of golf of his life last Saturday.... read more