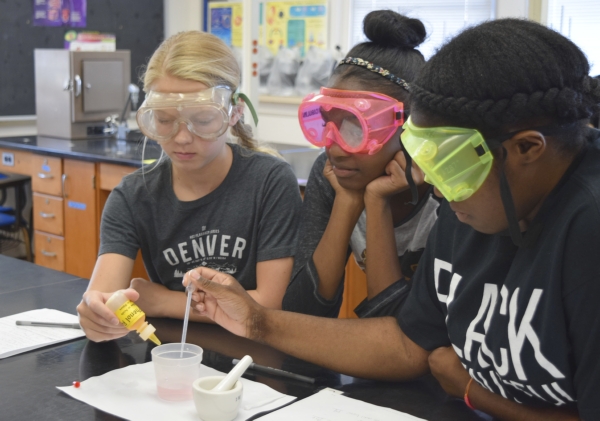 STEM Academy continues to attract students in its eighth year Tom Bristol, a rising eighth grader at Salisbury Academy, tests a propeller in a physics class at Salisbury High School’s STEM Academy. This is the third year Bristol has attended the summer program. Rebecca Rider/Salisbury Post

SALISBURY — It may be summer, but in an upper floor classroom at Salisbury High School, rising sixth-graders work constructing towers out of paper Dixie cups and cardboard.

The goal, said Renick Sides, a soon-to-be student at China Grove Elementary, is to design something that can stand even in the strongest storm.

“So we’re making these towers to see if the wind can knock them over,” he said.

“We build things based on what we’ve learned, and it’s really fun,” student Courtney Williams said.

Then, while the Salisbury community was searching for a solution, the mills began closing, and training in STEM categories became imperative.

“This was the response that was come up with,” Whitson said.

For $25 a week — though waivers and reductions are available — any child who lives in Rowan County can attend the STEM Academy and learn advanced topics such as biochemistry, forensics and virtual reality coupled with hands-on experience that helps set the academy apart. These are things that students wouldn’t learn in a typical classroom, Whitson said.

“A lot of our K-8 schools just don’t have the facilities or resources,” he said.

But STEM Academy students can use Salisbury High’s labs to build hovercraft or test the effectiveness of antacids like Alka-Seltzer.

The academy attracts students from every middle school in the county, Whitson said, as well as home-school students and students from private schools like Salisbury Academy. Classes cap off at 16, and while anyone can be accepted, Whitson said program leaders do like to see students who are serious about school and who are interested and eager.

“We expect the kids to come here and be ready to learn,” he said.

This year, Whitson said, about 115 students will attend over the four-weeks of the academy. Students take two classes a day, but the topics vary by week. Weeks one and four share the same curriculum, while topics branch out during the middle of the camp. Depending on grade level, students can study environmental science, chemistry, physics, Adobe programs such as Photoshop, medical science or anatomy.

“So we try to get them a little bit into lots of different areas,” Whitson said.

Tom Bristol, a rising eighth grader at Salisbury Academy said he’s been attending the camp for three years. This year, he’s working in the program’s physics lab to create a hovercraft. Using a small battery and some electric cables, he tests the effectiveness of a propeller. Bristol said the hands on approach and the alternation between learning computer programs and more physical labs is what keeps him coming back.

Many children with an interest in horses grow up playing with, cherishing and collecting their Breyer Horse models. Lisa Towell... read more