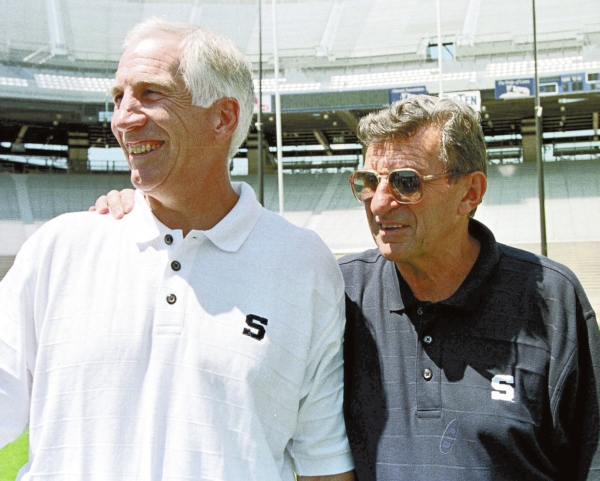 FILE - In this Aug. 6, 1999, file photo, Penn State football coach Joe Paterno, right, poses with his defensive coordinator Jerry Sandusky, during the college football team's media day in State College, Pa. Newly released court documents provided new details Tuesday, July 12, 2016, on allegations that Paterno was told in 1976 about a sex abuse accusation against Sandusky, and that some of Paterno’s assistants witnessed improper contact between Sandusky and children in the 1980s. Sandusky, who was arrested in 2011, is serving 30 to 60 years in prison on a 45-count child molestation conviction. (AP Photo/Paul Vathis, File)

HARRISBURG, Pa. (AP) — Penn State football coach Joe Paterno, told by a teenage boy in 1976 that assistant coach Jerry Sandusky molested him in a shower, responded that he didn’t want to hear about it and had “a football season to worry about,” according to court documents unsealed Tuesday.

The boy, now a man identified as John Doe 150, said in 2014 that other boys in a shower heard him yell that Sandusky had just touched him sexually. He said he told several adults about it before seeking out Paterno.

“Is it accurate that Coach Paterno quickly said to you, ‘I don’t want to hear about any of that kind of stuff, I have a football season to worry about’?” a lawyer for Penn State’s insurance carrier asked the man.

“I was shocked, disappointed, offended. I was insulted,” John Doe 150 testified. “I said, ‘Is that all you’re going to do?’”

He said Paterno “just walked away.”

Excerpts of the man’s testimony were among dozens of documents made public Tuesday in Penn State’s fight with Pennsylvania Manufacturers’ Association Insurance Co. over payments to Sandusky’s accusers. Sandusky was convicted in 2012 of dozens of child sexual abuse counts and is serving decades in prison while he appeals.

A judge disclosed the existence of the 1976 allegation two months ago, along with claims Penn State coaches witnessed inappropriate contact between Sandusky and children in the 1980s, but the newly unsealed documents provided greater detail.

Paterno told a grand jury in 2011 he first learned of Sandusky’s inappropriate sexual contact in 2001, though records show high-ranking Penn State officials dealt with a complaint in 1998 from a woman whose son had showered with Sandusky.

Paterno died in January 2012, two months after Sandusky’s arrest. A lawyer for his family said elements of John Doe 150’s story “defy all logic” and there’s evidence that “stands in stark contrast” to his claims.

A lawyer for Sandusky, who retired in 1999, also denied the allegation.

Testimony made public Tuesday suggested some Penn State coaches were aware of Sandusky’s abuse decades ago.

Mike McQueary, a former assistant coach who told Paterno he saw Sandusky abusing a boy in a team shower in 2001, said in a 2015 deposition former defensive coordinator Tom Bradley was “not shocked” when told of it.

Bradley, who briefly took over as head coach after Paterno’s firing, “said he knew of some things” about Sandusky dating to the 1980s, McQueary testified.

McQueary said Bradley told him he’d been approached by someone in the ‘80s who saw Sandusky “doing something to a boy” and in the ‘90s former assistant coach Greg Schiano saw Sandusky in the shower with a boy.

Bradley, now the defensive coordinator at UCLA, and Schiano, who holds the same position at Ohio State, denied witnessing any inappropriate behavior at Penn State.

A man called John Doe 75 said in a 2014 deposition assistant football coach Joe Sarra walked into a coaches’ meeting room in 1987 and saw Sandusky with his hands down the then-13-year-old boy’s shorts.

John Doe 75 said Sarra may have said something like, “Oh, sorry,” and immediately walked out. Sarra died four years ago.

A 2014 deposition by a man called John Doe 101 said Sandusky fondled him when he was a boy inside a crowded Penn State pool and coaches often saw him showering with Sandusky. But the one coach the man named said he wasn’t working there at the time.

The records also include an insurance company lawyer’s analysis that Penn State overpaid to settle with Sandusky’s accusers, possibly as a result of the university’s concern about publicity and a desire to resolve the matter quickly.

Lawyer Eric Anderson said Penn State “made little effort, if any, to verify the credibility of the claims.” The university has paid $92 million to settle claims from 32 Sandusky accusers.

Lawyer Ken Feinberg, who helped mediate claims against the university, said the process was “very objective” and none of the cases was easy to resolve. He said Penn State was diligent in making sure the claims were supported by sufficient proof.