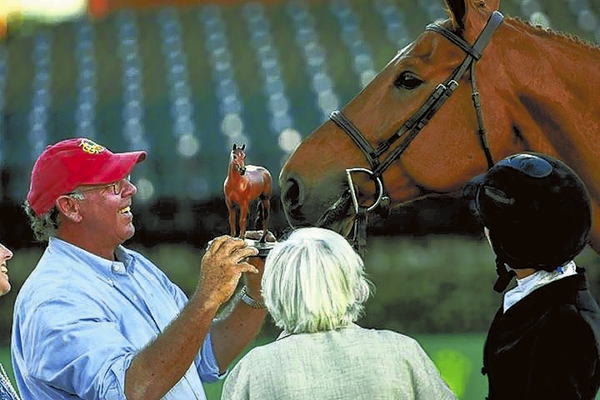 Many children with an interest in horses grow up playing with, cherishing and collecting their Breyer Horse models.

Lisa Towell was one of those kids years ago, so you can imagine how thrilling it was for her and husband Jack to see Brunello become immortalized as a Breyer Animal Creations model in June.

The Towells’ daughter, Liza Towell Boyd, rode Brunello to a record three consecutive USHJA International Hunter Derby Championships from 2013-2015, and he trained at the family’s Finally Farm in Camden, S.C.

Brunello, an 18-year-old chestnut gelding, is owned by Janet Peterson and Liza Boyd.

On June 10, before a large crowd at the Tryon International Equestrian Center in Mill Spring, Brunello was introduced for the first time as a Breyer Horse, and a limited edition of 400 Brunello models with a green TIEC horse blanket sold out that weekend.

During an evening break between the Classic and Handy rounds of the USHJA International Hunter Derby June 10, Brunello strode out to applause.

“It was a huge, huge honor,” Lisa Towell says.

On the venue’s Jumbotron that evening, there were photos and videos of Brunello’s career, which included his being named the U.S. Equestrian Federation’s National Horse of the Year twice, in 2014 and 2015.

“I think the spectators were really into it,” Boyd said on the Finally Farm website, “and some had come that night just to see him. It was such a privilege to be there with him.”

Boyd said Brunello, whose nickname is “Ike,” is a horse everyone can relate to.

“It was an exciting moment for the sport, and Tryon brought out so many people,”  Boyd said. “Kids came to the barn afterward and played with him, and parents came up and thanked me and told me their kids looked up to us. It was really overwhelming.”

The Towell family connection to Salisbury is quite strong. Lisa and Jack both grew up in Salisbury and graduated from Salisbury High. Jack also is a graduate of Catawba College.

Lisa is the daughter of Lib Taylor of Salisbury and the late Ed Taylor. Jack is the son of the late Ned and Rachel Towell.

All three of Jack and Lisa’s children were born in Salisbury — Liza, Ned and Hardin. Liza and Ned attended Sacred Heart Catholic School before the family moved to South Carolina.

The “Finally Farm” name for their operation in Camden comes from the Towells’ having previously worked for so many other people that they always used to begin sentences by saying, “When we finally have our own farm … ”

Both Liza and Hardin are highly accomplished riders, first as juniors and now as adults. Liza also trains horses with her father at Finally Farm.

According to the company’s website, Breyer models begin as horse sculptures created by leading equine artists. They are cast into a copper and steel mold, and each model is created one at a time from that original mold, which is injected with a special resin.

Once the model is molded, Breyer’s artisans paint them by hand. The company says about 20 artisans work on each individual horse.

At the TIEC weekend in June, there was a “meet and greet” with Brunello and his longtime groomsman Alberto Ramirez. During that time, Boyd had an autograph session during which she signed the Breyer models or the boxes they came in.

“There were lots of cute pony kids that I knew and then some people who were Breyer collectors who drove in just for the signing,” Boyd said on the farm’s website.

The Breyer models of Brunello that weekend sold for about $50 each, but Lisa Towell said by Monday they were being offered on eBay for $300 apiece.

Breyer has just released its regular 1:9 scale model for Brunello to vendors, and Lisa says the Finally Farm tack shop stocked up on a good supply this past weekend. On the Breyer website, they sell for $46.99 each.

The Brunello model  is about 12 inches long and 9 inches high.

On the evening of June 10 when Brunello was honored, Boyd said the horse was a little confused as he walked into the ring during the derby because he was braided but not competing.

“But then he seemed to soak it all up,” Boyd said. “Once again, that horse never lets us down; he stepped up and was the perfect gentleman.”