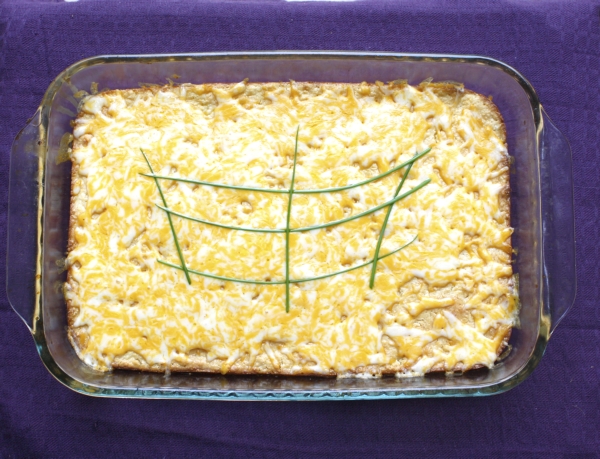 Stephen Smith/For the Salisbury Post This corn soufflé is more like spoonbread and uses fresh corn, muffin mix and cheese.

Enjoy every kernel of this season’s corn Deirdre Parker Smith/Salisbury Post The corn is coming in, and it’s a great time to enjoy it in all your favorite ways.

SALISBURY — They say the best time to cook fresh corn is right after you pick the ear off the stalk — to have the boiling water waiting before you go out to harvest.

The minute you pick an ear of corn, the sugars start to change to starches. Supersweet varieties stay sweet longer than some of the old standards.

Sugar loss slows down if you refrigerate it, or at least stack it in a single layer. The corn can overheat in its husk and needs breathing room. You should cover the ears with a damp cloth.

For the supersweets, you’ve got more time and the corn will remain sweet for days after harvest.

For fresh corn, remove the husks and silk and boil for 5-8 minutes. Place ears in a steamer and steam 8-12 minutes, depending on the corn’s maturity.

To grill, turn down the husk and remove silks, take off the outer leaves. Dip the corn, husk and all, in water. Drain, wrap husk around and put over hot coals for 20-25 minutes, turning frequently.

Some people swear that microwaving is the best method to cook corn. Peel down husks and remove silks. Brush ears with melted butter and pull up husks. Fasten with a string. Place in a microwave, allowing at least 1 inch between ears. Cook 4 minutes at full power and turn corn. Cook 4 more minutes. Let stand 2 to 3 minutes before serving.

If you get tired of fresh corn on the cob, slathered with butter. change it up with different toppings or use it in a recipe. To help you with portions, one ear of corn produces about a half cup for corn kernels, depending on the size of the ear.

Additions to corn on the cob are only limited by your imagination. Butter and salt is all many people need.

But you can wrap corn with bacon and grill it, you can add herbs to the butter. How about Buffalo corn, drizzled with butter and wing sauce, sprinkled with blue cheese?

By now, you must have had

1 can drained and rinsed black beans

a little hot sauce or a fresh jalapeño

2 Tbsp. lime juice and the same amount of olive oil

Toss in chopped cilantro at the last minute and serve with any meat or even top a hotdog with it.

Have a corny breakfast by adding corn kernels to your eggs or stirring fresh corn into your grits. You could also make a corn fritatta for a crowd.

Pour into an oiled 8-inch ovenproof skillet and cook over medium heat about 5 minutes. Place in 400 degree oven for about 15 minutes, until set.

If using bacon, cook in large skilled until crisp. Remove and drain bacon. Save 2 Tbsp. drippings. Sauté corn, onion and bell peppers until tender, about 6 minutes. Add cream cheese and half-and-half, stirring until cheese melts. Stir in sugar, salt and pepper. Top with bacon and serve.

This is a favorite at our house, and we always make it with fresh corn, though the recipe calls for a 15-ounce can of corn. We don’t use the can of creamed corn, instead using the milk from fresh corn. This recipe is sort of like a loose cornbread or spoonbread and goes with everything, or is delicious all by itself.

Preheat oven to 350 degrees. In a large bowl, stir together both kinds of corn, the corn muffin mix, sour cream and melted butter.

Pour into a greased 9- by 13-inch baking dish Bake for 45 minutes, or until golden brown.

Remove from oven and top with cheese. Return to over for 5 or 10 minutes to melt cheese. Let stand for at least 5 minutes before serving and serve warm.

If you want to hit most of the tastebuds on your tongue, try

Corn Salad with Feta and Walnuts

You can toast the walnuts on a baking sheet in a 400-degree oven for 6 to 8 minutes, then chop. Mix all ingredients and sprinkle with feta before serving.

This is sweet, salty, spicy and sour, as well as crunchy.

How about a cobbler? (both recipes from RealSimple magazine)

12 Tbsp. unsalted butter, plus more for the dish

Heat oven to 375. In a skillet over medium heat, melt 2 Tbsp. butter. Add the jalapeño and scallions. Cook for 3 minutes. Add corn and broth. Increase heat and cook for 4 minutes.

In a large bowl, combine flour, baking powder and remaining salt. Using two knives, a pastry cutter or your fingers, add the remaining butter, cut into small pieces. Mix until it resembles small crumbs. Stir in the thyme and milk.

Drop heaping spoonfuls of batter on top of the corn mixture. Bake for about 50 minutes.

Bring it on: PPT announces seasons for Meroney, Norvell theaters