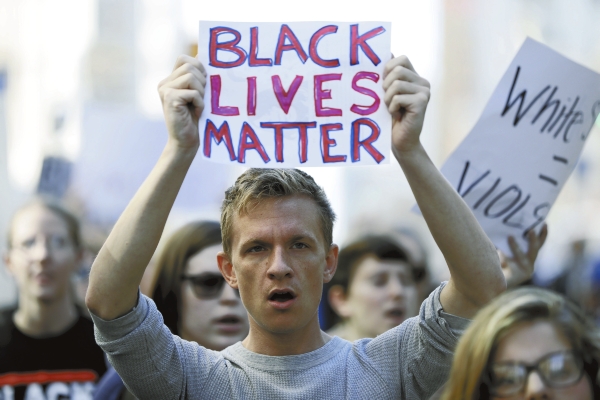 Protesters march and demonstrate to decry recent shootings of black men by police and urge reforms in front of City Hall in Philadelphia on Monday. It was one of six protests around the nation planned by a group called Showing Up for Racial Justice. (AP Photo/Matt Rourke)

Editorial: Waking up to injustice Dylann Roof hoped to start a race war last July 17 by shooting up a prayer service at a black church in Charleston, S.C.. The young white man killed nine black people after they welcomed him into their gathering. Roof’s war fizzled when the families of his victims said they forgave him.

Micah Xavier Johnson launched a personal war last week by shooting 12 police officers as they wateched  over a peaceful demonstration in Dallas. Five officers died. During a standoff, the young black man told police he was upset about recent police shootings in which two black men were slain, and said he wanted to kill white people, especially white officers. Johnson’s war died with him. Relatives of the black men killed by police in Louisiana and Minnesota said more violence was not the answer. Leaders associated with the Black Lives Matter movement condemned the Dallas shooting.

Instead of letting hatred escalate, key people can calm tensions by denouncing violence, by advocating for peace and striving for better understanding. That is the case in the despicable ambush of the Dallas officers. And it applies to the repeated incidents of black men dying at the hands of police. We should be able to talk about this without putting all officers on the defensive.

Slate columnist Jamelle Bouie says there’s been a subtle shift in the use-of-force discussion: “… there are signs that the broad public — the white public — is waking up to the problem,” Bouie says. “Conservative writers like Matt Lewis in the Daily Caller or Leon Wolf in RedState are conceding the pervasiveness of police brutality. Prominent Republicans such as Paul Ryan did the same, praising President Obama’s remarks and hailing peaceful protests. Even Newt Gingrich — who once called Obama a ‘food stamp president’ — agreed. ‘It’s more dangerous to be black in America,’ he said. ‘You’re substantially more likely to be in a situation where police don’t respect you.’ ”

The attack on Dallas police was despicable and cowardly — a lone gunman’s way of lashing out. It did nothing, though, to lessen the need to address police tactics that have gone awry over and over across the country. As Ryan, Republican speaker of the U.S. House, said last week, we all want a world “in which people feel safe regardless of the color of their skin.”