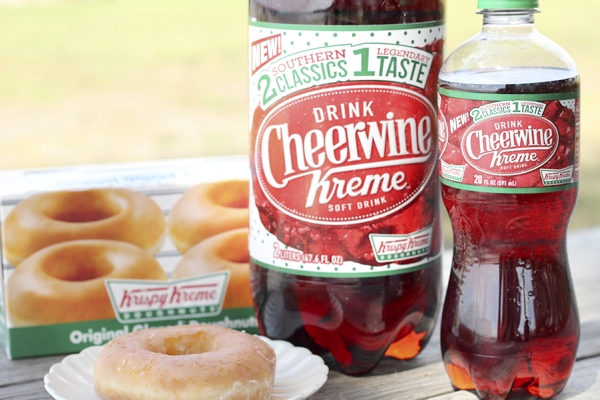 Cheerwine Kreme is a new collaboration between Cheerwine and Krispy Kreme.

SALISBURY — The flavors of Cheerwine and Krispy Kreme doughnuts have married. The wedding happened Monday when Cheerwine Kreme, a new soft drink, debuted in grocery stores, convenience stores and at Krispy Kreme shops.

The drink will be available in the Carolinas and parts of Georgia.

“Krispy Kreme and Cheerwine are cut from a very similar cloth, as both brands are Southern staples and have been enjoyed by generations,” Tony Thompson, president and chief executive officer of Krispy Kreme Doughnuts, said in a press release.

“Cheerwine Kreme is a refreshing take on two iconic treats that will be sure to become another Southern classic.”

On July 23, Krispy Kreme Doughnuts is inviting people to its shops in North Carolina, South Carolina and Savannah, Ga., to sample Cheerwine Kreme for free.

This is the second time Cheerwine and Krispy Kreme have collaborated, In 2010, the two companies joined forces to bring their fans the Cheerwine-filled Krispy Kreme doughnut, which sold out in many shops during its limited availability.

“We worked hard in our ‘labs’ perfecting the taste, ensuring that Cheerwine Kreme will delight our loyal fans while attracting new consumers through a deliciously unique flavored soft drink.”

Cheerwine and Carolina Beverage Corp.’s roots in Salisbury go back to 1917 and L.D. Peeler. The company is still privately owned and managed by the same founding family.

Krispy Kreme was founded in 1937, and its doughnuts can be found in approximately 12,000 grocery, convenience and mass merchant stores in the United States. The company also has more than 1,000 retail shops in 27 countries.

By Susan Shinn For the Salisbury Post KANNAPOLIS — In the basement of his Kannapolis home, Gene Long sits in a... read more