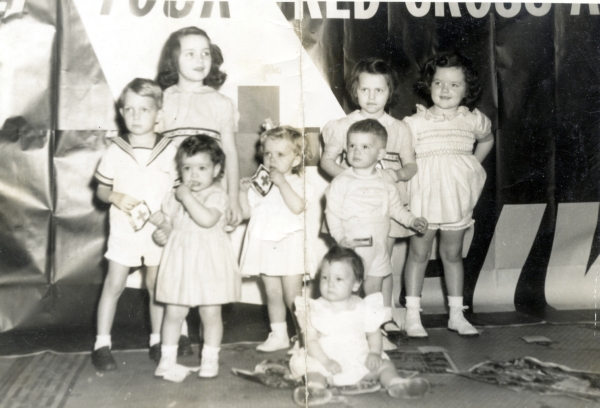 This month marks the 100th anniversary of the American Red Cross in Salisbury and Rowan County. The local office, now part of the Southern Piedmont Chapter, is the third oldest in the state behind Wilmington and Asheville. Mary Jane Fowler had this photograph, which appeared in the Salisbury Post March 4, 1945, during World War II. The headline for the photograph was ‘They’re Keeping Red Cross by Daddy’s Side,” and the caption read as follows: ‘Each of these cute youngsters would rather have Daddy here, where they could look after him themselves, but since they can’t, they — and their mamas — are thankful the American Red Cross is there to do it; for the daddy of each one is overseas.

‘They came to the Red Cross War Fund headquarters Thursday, the day the 1945 appeal began, and paid $7 each for a second of worldwide Red Cross service for daddies on the war fronts.

‘In the back row are Odell Sapp Jr., son of Lt. Odell Sapp, in the Admiralty Islands; Jane and Frances Wagoner, daughters of Capt. Ralph Wagoner, in the Philippines; and Jane Gunnell, daughter of Capt. Bruce Gunnell, in Italy.’