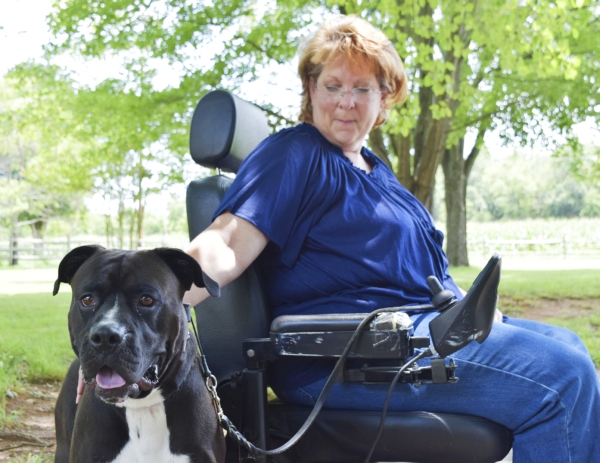 Gina Bond, who suffers from multiple sclerosis, is raising money to have her dog, 3 year-old Striker, trained to be a service dog. Getting a pre-trained dog can cost more than $30,000, and would have required Bond to find Striker a new home. Rebecca Rider/Salisbury Post

MOUNT ULLA — Gina Bond needed a service dog, though she said it took her a while to realize it. The Mount Ulla resident was diagnosed with multiple sclerosis (MS) in 1993, when she was in her 30s.

At the time, she ran a daycare, and said she began feeling like she was falling, and kept mixing up her students. An MRI revealed dark areas on her brain.

“Even I could look at it and know that it wasn’t right,” she said.

A short time later, Bond received an official diagnosis. But she said she can remember being 10 or 12 and being hit with terrible fatigue, which is often associated with the neurodegenerative disorder.

“You’re going about your day and everything’s fine,” she explained, “and suddenly it’s like you’ve run square into a wall. You can’t do any more.”

Over the years, the disease grew worse. Bond used a cane, a walker and said now she relies on a motorized scooter.

That’s when Bond stumbled across an article about service dogs trained to help people with MS — Bond said that until then, she didn’t know dogs could be trained to help with the disease, which can affect things like memory, vision and sense of balance.

But when she began looking into getting a service dog, she ran into two problems. The first was money. A trained service dog can cost upwards of $30,000.

“I didn’t seem to have quite that much money,” she said.

And getting a service dog would mean finding a new home for her 3-year-old boxer, Striker. But after some research, Bond came up with a solution — training Striker to be her service dog.

“Normally when you think of service dogs it’s shepherds and labs. But (Striker’s) tall enough and strong enough to do what he needs to do,” she said.

Finding someone to train him, however, was a different matter. Bond said several trainers expressed reluctance at homing a full-grown dog with puppies in training, citing liability issues. But she eventually tracked down a trainer, Glenn Sherill with Train, Play, Live in Rockwell. The total cost of training Striker comes out to approximately $7,500, and Bond has been doing it in pieces.

She raised money in the community by hosting a dinner, and was able to send Striker off to the first half of his training — an eight week stint with the trainer. Bond said she and her husband went to visit, and were surprised at the result.

Striker, normally an excited, hyper dog, was calm and collected.

“It was amazing,” she said.

He’s already helping out in small ways, but still needs to go back for specific training, Bond said. Training Striker to do specific tasks and registering him as an official service dog will cost approximately $2,500.

To help raise money, Bond is hosting a “big blowout” at Faith Park. Admission will be free, and the event will feature a free concert by local band Too Much Toney. Tickets to benefit Striker’s training will be sold for games and to enter a corn hole tournament.

“We’re going to have something, basically, for everybody,” she said.