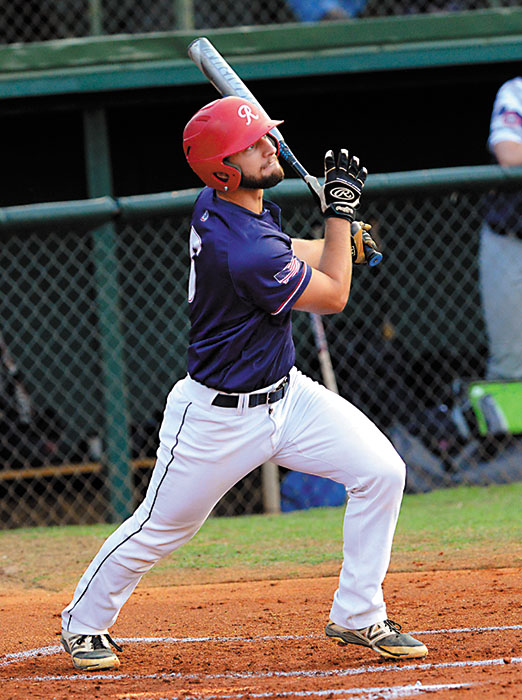 Rowan Legion Jake Pritchard got the game-winning hit against Randolph on Sunday night. Here, he gets a hit against High Point during a game on May 25. Photo by Wayne Hinshaw, for the Salisbury Post

SALISBURY — Rowan County catcher Jake Pritchard spent seven innings warming up pitchers in the bullpen and two at-bats struggling at the plate.
But in the bottom of the 11th at Newman Park, Pritchard came through.
With the bases loaded and one out, he lashed a first-pitch fastball from closer Cameron Reid for a clean single, and Rowan beat Randolph County, 5-4, in the opening game of what promises to be an exciting, best-of-five series.
Pritchard had popped up in a key situation as a pinch-hitter in the eighth, and he’d also grounded into a double play in the 10th.
“I was hoping I’d get back up there with a chance to redeem myself, and I’m happy that I did,” Pritchard said. “They had a heck of a pitcher, especially throwing from the side like he was. But I knew if I got a fastball on the first pitch, I was going to be swinging.”
Rowan’s winning rally in the 11th began with a walk to Juan Garcia. Lee Poteat’s single to right-center — his fifth hit of the game — sent Garcia to third base, but Poteat was thrown out trying to reach second. After intentional walks to Brandon Walton and Caleb Link, and with Randolph hoping for another double play off his bat, Pritchard delivered his clutch hit.
“Both teams played pretty well, but both teams had a chances to score a lot more runs than they did,” Randolph coach Ronnie Pugh said. “But you have to credit good defense and you have to credit good pitching for limiting the number of runs that were scored.”
Rowan (25-8) made a series of baserunning blunders and left 17 men on base. You lose those almost every time, especially against a strong opponent, but Rowan found a way to pull this one out at home in front of a large, vocal crowd.
“We had a lot of screw-ups early in the game, but then we were able to bear down and do a lot of good things late to win it,” Rowan coach Jim Gantt said. “All our pitchers did a nice job and our middle infielders made a lot of good plays.”
Rowan starter John Owen watched his first pitch of the night leave the ballpark on a Kirby Lambert home run that was smoked to right field, but he battled through seven innings. Owen exited with Rowan trailing 4-3.
“Owen kept his poise in tough situations and with us making a lot of mistakes,” Gantt said. “It was a good thing he was the guy on the mound.”
After relieving Owen, Sawyer Strickland put up a Randolph zero in the eighth. Then with the bases loaded in the Randolph ninth after a double and two intentional walks, Hunter Shepherd got the 6-4-3 double play ball that got Rowan out of the inning and kept the deficit at 4-3.
Rowan tied the game against Reid in the bottom of the ninth. Chandler Blackwelder and Dalton Lankford drew walks and Garcia’s single to left loaded the bases with one out. Poteat’s single to right plated Blackwelder with the tying run, but pinch-runner Noah Gonzalez was thrown out at the plate trying to score the winner.
Shepherd, the winning pitcher, got Randolph (24-9) out relatively easily in the 10th and got the final out of a tense top of the 11th on a flyball to Poteat in right field with two men on base.
“I was missing a lot of spots tonight and I didn’t come through several times at the plate when I wanted to,” Shepherd said. “But the team kept fighting back to win the ballgame.”
Rowan took a 3-1 lead in the third when Shepherd did come through. His two-run double off the center-field wall brought home two runs. Then Shepherd scored on a single by the red-hot Poteat, who has nine hits in his last two games.
Gantt said Poteat injured a knee on Friday and could’t practice Saturday. Maybe that explains why he only went 5-for-6 instead of 6-for-6. He struck out in the first inning, but he had hits in his next five trips to the plate.
“They beat me on some pitches tonight,”Poteat said. “But I was lucky enough to get some hits backside.”
Randolph (24-9) overcame its early deficit, closing within 3-2 in the fourth on Tristan Marsh’s RBI double and taking a 4-3 lead in the seventh with the aid of a run-scoring passed ball.
Blackwelder, Rowan’s center fielder, had three hits and also walked twice. Second baseman Tanner File had a fine defensive game and got on base three times.
Still, even with a constant parade of baserunners, Rowan had its hands full getting runs across. Randolph starting pitcher Zac Kemp and reliever Caleb Hassell, who hurled the seventh and eighth, were tough.
“It was a heck of a game for us to win,” Poteat said. “It gives us crazy momentum.”
Game 2 is tonight at McCrary Park in Asheboro.