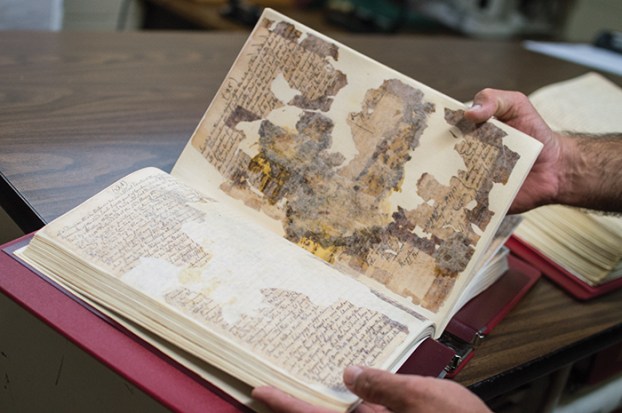 Josh Bergeron / Salisbury Post - Register of Deeds John Brindle shows damaged pages of a record book that will have to be repaired as part of an effort by Brindle's office to digitize and repair books.

Register of Deeds digitizes its entire stock of records

SALISBURY — Whether you’re looking for records from Rowan County’s earliest days or the 21st century, you can find it all online.

Along with issuing marriage certificates, recording land transactions and other daily tasks, the Rowan County Register of Deeds office also maintains mountains of historical records. Some of the record books are so old that pages are hardly legible.

In an effort to preserve Rowan County’s history, Register of Deeds John Brindle says his office has recently digitized all of the records contained in his office. He knows the exact book and page where you can find American explorer Daniel Boone’s signature. Now, he’ll also be able to point people to Boone’s records online. Modern-day records are automatically posted online, he said.

Brindle said the digitized records could be useful for researchers or people with a casual curiosity about who owned their land years earlier.

“Your life plays out here in the deeds’ office,” Brindle said. “From the time you’re born, to when you’re married, when you buy property, your military discharges, to the time you die, it’s all in the Register of Deeds office.”

Shane Aldridge, one of two assistant registers of deeds, also emphasized the importance of the office’s records.

“Really, it’s the story of our county’s people,” Aldridge said.

Brindle said Rowan’s records are especially significant because Rowan County once contained a vast swath of land without a western boundary. A number of North Carolina counties were spun out of Rowan.

“Because Rowan County is one of the oldest counties in the state, we have 25 percent of the land records of North Carolina stored here in Rowan County,” he said. “We also have the responsibility, too, to preserve those records.”

Brindle said he first started digitizing the records when he served as register of deeds from 2008 to 2010. He said the project stalled after he was unsuccessful in the 2010 election.

Although employees have now digitized records in the Register of Deeds office, Brindle said there are still uncompleted parts of his current project.

He has plans to digitize the indexes of individual pieces of property. As a result, researchers could more easily find property owners from years earlier, he said. Parts of the ongoing project will also involve creating better images of record books for microflim.

Some of the material used to create records books has led to the deterioration of pages. As a result, Brindle says pages will be covered in a new, better type of laminate.

At the end of the project, Aldridge said researchers could either flip through a digital copy of record books or search for records individually.

Brindle emphasized that digitizing records was an in-house project that didn’t use any “taxpayer dollars.” His office used money from daily transactions from customers, instead of annual funding from a government entity.

Brindle said people who are interested in searching through digitized records could contact his office for tips about research. The Rowan County Register of Deeds office is located on the first floor of the county building at 402 North Main Street. You can also contact the office by phone at 704-216-8626.

By Josh Bergeron josh.bergeron@salisburypost.com Rowan County just wrapped up an election in June, but qualifying for the next political race... read more