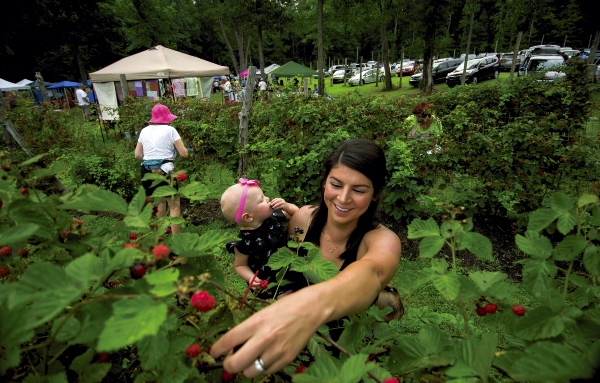 JON C. LAKEY / SALISBURY POST Amanda Drechsler reaches for blackberry while her 1-year-old daughter Hadley takes a bite of one.

“I learned a lot from last year,” she said.

The second annual Blackberry Festival was held on Saturday under cloudy skies during the morning hours. The festival started at 9 a.m. and ended at 4 p.m., but Hill said all of the blackberries were picked by 11 a.m.

Hill said she even brought in other blackberry farmers in the area to supply blackberries this year, but there just wasn’t enough to go around.

Hill said the weather stifled the growth of the blackberries and Terry Hill, Lisa’s father, said the berries were actually two weeks late.

They also ran out of blackberry ice cream and vendors ran out of their blackberry-themed products by noon last year.

This year, Hill said they made 60 gallons of blackberry ice cream and 40 gallons of other flavors, so visitors were able to enjoy plenty of ice cream as well as food, crafts and products from vendors.

About 120 vendors, up from about 100 last year, were selling grilled corn, teriyaki on a stick, hot dogs and cotton candy. Many of the vendors had blackberry-themed products like sweet blackberry tea and blackberry syrups and jellies.

“This year I was really pushing vendors to incorporate blackberry in their product,” Hill said.

One of the vendors, Rosalyn Byler, got together with friends and family to sell breads, pies, donuts, granola and blackberry lemonade at the festival.

She was raising money to travel to China in November to pick up her newly adopted 2-year-old daughter Megan.

Byler said she and her husband started the adoption process last November. The only thing standing between the Bylers and their new daughter is the money needed to get to China.

Byler has four biological children already, including daughter who is excited to be getting a sister.

At another booth, Aileen Davis-Cockerham sold her handmade magnetic jewelry. To keep with the blackberry theme, Davis-Cockerham found beads in the shape of blackberries to add to her bracelets.

Davis-Cockerham has been selling the bracelets and necklaces for 15 years, mostly at street festivals. The magnetic beads and black hematite stones help with blood circulation and can be used to help with ailments such as arthritis, asthma, migraines and carpal tunnel.

“I wear mine for swelling,” she said, wearing the magnetic jewelry around her wrists.

Penny Swink, owner of Butterfly Creations, had blackberry hair bows for sale, complete with a light, silky bow and a fake blackberry glued in the middle.

Swink said she likes to make hair bows for different occasions. At her booth there were red, white and blue bows for the Fourth of July, pink bows for breast cancer awareness and multi-colored bows for autism awareness.

“I just do different things for different events,” she said.

Swink said she usually sells her products, which also includes diaper creations, at festivals and other vendor events.

For Elizabeth Wood, owner of Raw Beauti, it was her first time selling her products at a festival. She usually sells her natural handcrafted skin and beauty products online at Etsy.com and in boutiques.

She was also selling some natural and herbal-infused serums and under-eye creams.

Wood said she had received a lot of traffic during the Blackberry Festival.

Other than the vendor booths, visitors listened to music by Praise Brass Band, Trailblazers and Liam Pendergrass. Some even brought their own chairs to sit in front of the stage and relax.

There was also a train for kids to ride that winded through the area.

Admission was free, with a $1 charge for parking. The Liberty Fire Department coordinated all of the parking and the proceeds from the parking fees went to the department.

Riding Route 66: Having a whale of a time