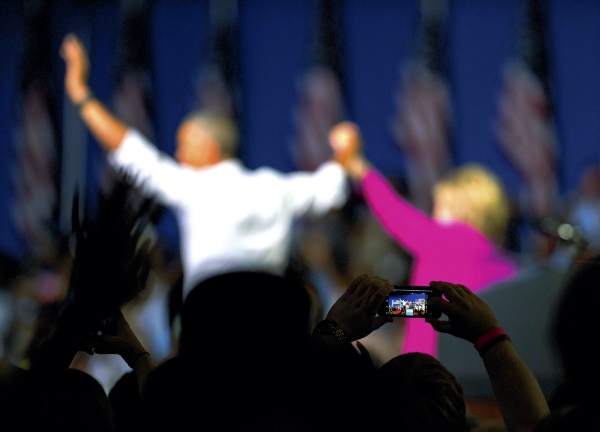 A spectator captures the moment on a smart phone as President Obama and Hillary Clinton campaign together in Charlotte last week. Jon C. Lakey/Salisbury Post

If you’d like to decide on the next president in the same way most voters pick a candidate in state and local elections, there’s a simple solution.

Attend a rally hosted by presumptive Republican nominee Donald Trump. Then, go to one hosted by presumptive Democratic nominee Hillary Clinton. Do it in the opposite order if you like. Either way, you’ll immediately spot the most apparent, and perhaps most important, difference between the candidates — their general demeanor and character.

It’s a difference that voters use year after year to pick their favorite candidate in local and state elections. Although it’s encouraged, voters don’t often thoroughly vet candidates based on policy positions.

Some voters choose Trump for his free-wheeling and frequently incendiary statements. Many others disregard Trump as a serious candidate because of the way he speaks. In Clinton’s case, voters seem to favor her because of political experience. She also has lost support with voters because of political scandals. Voters who dislike Clinton generally say she’s not trustworthy. Those decisions aren’t based on individual policy. Rather, they are an indication of a person’s character.

Journalism matters and often affects the direction of the campaign, but candidates can shift the discussion in their favor. So, public portrayal also matters and can score votes.

In Clinton’s closest stop since becoming the presumptive nominee — Tuesday’s Charlotte visit — she brought along President Barack Obama and let him do most of the talking. Obama rambled, but owned the line that led many stories following the event.

“I have run my last campaign, and I couldn’t be prouder of the things we’ve done together, but I’m ready to pass the baton,” he said. “And, I know she is going to take it and win that race.”

Clinton’s comments briefly addressed her policy positions and mostly focused on praising Obama’s accomplishments. Her comments reflected the large banners that hung above the Charlotte Convention Center: “stronger together.”

“In America, we put common interest before self-interest,” she said. “We stand together because we know we’re stronger together.”

As he has in the past, Trump took a harsher tone hours later during a rally of his own in Raleigh. He lambasted Clinton for her use of a private email server during her time as secretary of state and raised concerns about a meeting between Clinton’s husband and Attorney General Loretta Lynch.

Interspersed throughout Trump’s speech were casual comments about a wide variety of things. The comments represent the free-wheeling tone that has won favor with voters.

At one point in the speech, for example, Trump talked about Obama playing golf in Hawaii. Trump guessed that Obama had played more rounds of golf than professionals.

At another point during Trump’s speech, he talked about how his hair withstood a rain storm.

“I got wiped out getting off the plane,” Trump said. “It was raining and windy and I want to tell you it’s actually beautiful, beautiful. And, now you know it’s my hair because any hair that could withstand that wind, it is my hair.”

Trump’s talk has become more familiar in the past few months, but it’s not been overwhelmingly successful locally in recent elections.

In Rowan, a trio of county commissioners were elected in 2014 specifically because they were not controversial. In a more recent election — the 13th Congressional District — a relative uncontroversial and politically unknown candidate beat out several others who billed themselves as ultraconservative and used free-wheeling, incendiary rhetoric.

Despite choices in other local elections, Rowan County voters chose Trump over his Republican rivals in the March primary by a margin of about 2,000 votes.

Voters frequently use demeanor and character as a barometer during elections because of uncertainty about issues that may pop up in the future. Trump supporters say they like his anti-establishment tone. Clinton supporters seem to like her experience and policy proposals.

Public personas aren’t necessarily reflective of a person’s character. In presidential races, however, it can be a valuable insight.

So, if character and demeanor are important, attend a rally for both candidates. Your candidate may inspire angry disaffected voters. Unless you’ve got an understanding of how that happens, you don’t have a true picture. And every voter should be as informed as possible.

Also, the rallies are free to attend regardless of political persuasion.