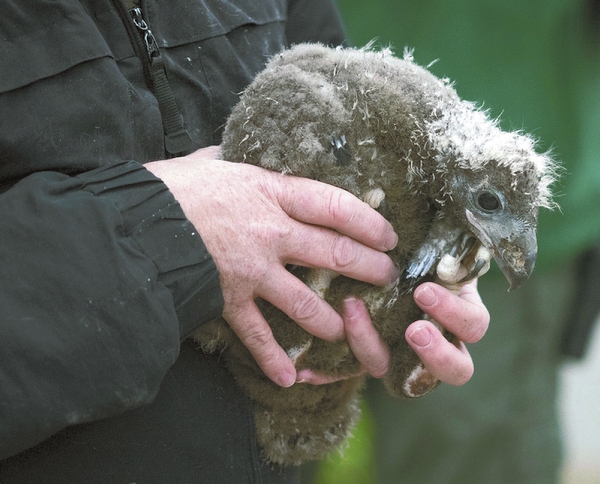 “This project was a statewide partnership to get this bird back into the wild,” said Executive Director Jim Warren. “Dan Nicholas Park, Carolina Raptor Center, NC State University, and the NC Museum of Natural Sciences are all cheering him on as we watch him fly north to cooler climates.”

Citizen scientists can track these birds’ migration online through www.movebank.org or on a smart phone via the Movebank app – “Animal Tracker.” Users of Movebank should search for the “Life Track Bald Eagle study.”

The app was co-piloted by Dr. Roland Kays, researcher at the NC Museum of Natural Science, and is publically available through app stores for smart phones and tablets. This technology will allow any individual to track the movements of Bald Eagles included in the study throughout their lifespan.

The transmitter installation is part of a STEM education and eagle conservation grant provided to CRC by Duke Energy. Another part of this grant, the Bald Eagle Migration formal curriculum program, will be launched this fall to study the data from “Freedom” in classrooms across the region.

“Duke Energy is pleased to join with Carolina Raptor Center to educate school children and the public about the importance of wildlife conservation,” said Shawn Heath, president of the Duke Energy Foundation. “The ability to have a positive impact on both the bald eagle population and a generation of students is what attracted us to this project.”

Updates are available on the Carolina Raptor Center website at http://www.carolinaraptorcenter.org/learn/eagle-tracking/

The Dan Nicholas Eaglet “Freedom” poked its head through his shell on March 10. Its parents are Bald Eagles “Liberty” and “Justice,” both of whom have lived at Dan Nicholas Park since 2006. On April 8, Carolina Raptor Center moved the Eaglet from the Dan Nicholas Park Nature Center to the Eagle Aviary to be fostered by longtime residents and Eagle parents, “Savannah” and “Derek.” The bird was determined to be a male Bald Eagle through DNA testing completed after his arrival at CRC.

The Eaglet was transferred to the hack tower on Tuesday, May 3. Carolina Raptor Center uses an accepted practice of “hacking” to reintroduce baby Eaglets back into the wild. Also called “soft release” because it occurs over a period of weeks instead of during a single event, hacking has been used to release approximately 10 Eaglets back into the wild at CRC. For the process, the young Eagles are placed in the tower where they can view their new territory. As the days go by, they finish growing the feathers needed for flight and developing the muscles to fly with. They are fed daily through a food hatch. At around 12 weeks, the doors are opened so that the bird can fly in and out (still fed every day) until they are ready to fly away.

Carolina Raptor Center hatched and released the first Bald Eagle chicks in captivity in 2006, when siblings Len and Lola were released into the wild and successfully tracked for years through a similar tracking technology. Since that time four additional chicks have been hatched and released from CRC’s Eagle Aviary. The Center has released 25 additional birds since 2008.