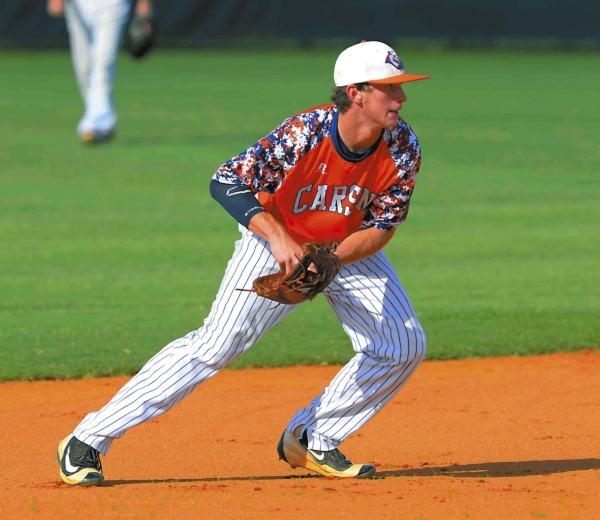 It added up to one miserable evening for the Carson Junior American Legion baseball team Saturday — and set the stage for tonight’s decisive, third-game matchup with Concord in the Area III championship series.

“It shouldn’t have even been a close game,” head coach Blake Cauble said after host Carson fell, 8-6, in Game 2, evening the best-of-three showdown at a game apiece. “We gave them too much. But we stayed in the game, fought back and made it close.”

Carson (27-7) had a chance to win its first Area III title after taking an 11-4 decision earlier yesterday in the completion of Friday’s suspended game. Run-scoring hits by Garrett Alewine and Karson Beacham sandwiched around a Concord error helped Carson score three runs in the top of the fifth inning and open a seven-run lead.

“We were flat in that one,” said Concord coach Cory Childress. “We were flat, no intensity, too complacent. And Carson, they did what they had to do.”

If Post 51 was feeling the heat heading into Game 2, it hardly showed. After winning only three games last season, it notched its 25th victory by playing small ball — massaging one run after another across the plate and putting Carson in a deep hole.

“We thought we would go out there, get this win and prepare for the states,” Alewine said. “Now we’ve got to take this loss to heart and pull together as a team.”

Carson used a two-out, RBI-double by losing pitcher Luke Barringer to take its only lead in the last of the first. Concord (25-7) answered with two runs in the second, two in the third and four in the fifth to go ahead 8-3.

“I felt really good coming out to start the game,” said Barringer, who escaped the top of the first unscathed despite a pair of Carson infield errors. “But later, I didn’t. I couldn’t hit my spots. Walks is what killed us. A walk equals a run in a lot of cases. When you start walking people you’ve really got to work hard to get back on top.”

It never happened. Barringer never commanded the strike zone, never forced Concord to play the game at his pace. He yielded five walks and four runs in just 2 2/3 innings and trailed 4-1 when Cauble pulled the tall right-hander.

“Technically, (Barringer) is not a starter-starter,” the coach said. “He’s just a kid that can come out here and throw for us.  Sometimes he throws really well and sometimes he’s iffy.”

Alewine, Carson’s heady catcher, agreed. “It wasn’t one of his worst (showings), but it wasn’t his best,” he said. “You can’t defend walks. And with some batters, in some cases, he couldn’t find the zone.”

Barringer was spelled by Jaxon Miller, who retired the first four batters he faced before allowing four runs — three of them unearned — following a throwing error in the top of the fifth. Teammate Zack Lee pitched out of a bases-loaded, none-out jam in the seventh.

Carson scored twice against reliever Logan Mauldin in the last of the seventh, when Chase Earnhardt and Tyler Thompson delivered run-scoring hits with two away.

“It got a little sloppy,” said Barringer, who switched to left field and finished 3-for-4 with two run-scoring doubles. “Sometimes you need that. Sometimes you need a loss. We’ve got to take this personally and be better (tonight).”

NOTES: Both teams will compete in the state tournament beginning Friday at Swansboro. At stake tonight is the Area III crown and accompanying trophy. … The defensive play-of-the-game came in the last of the fourth, when Concord second-baseman Michael Mutterer snagged a line drive off the bat of Sollie Holshouser and threw to first base to complete an inning-ending double play.